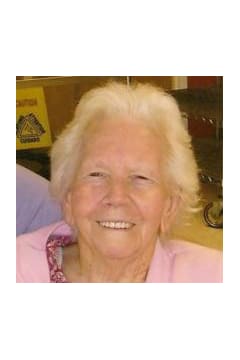 Mrs. Sviller Allene Bowen Hurst, age 89, of St. George, Georgia passed away Friday, October 26, 2012. She was born March 4, 1923 in Arabi, Georgia the daughter of the late Mr. Marion Jasper Bowen and the late Mrs. Scvilla Ellen Abernathy Bowen. She married John Henry Hurst on August 14, 1954 in Atlanta. She retired from Kraft Foods and was of the Baptist Faith. She loved Jesus, her Lord and Savior and was a woman after Godâs own heart. She loved children and was a Granny to all. She enjoyed flower arranging and was an avid cake baker and decorator. In addition to her parents, she was preceded in death by her husband, John Henry Hurst; son, Ronald T. Norris and several siblings. She is survived by her daughter and son-in-law, Becky and Bill Hawthorne of St. George; son and daughter-in-law, Jim and Mary Hurst of Bremen; five grandchildren; seven great-grandchildren; several nieces and nephews also survive. The family will receive friends at Jones-Wynn Funeral Home, Douglas Chapel, Tuesday, October 30, 2012 from 6:00 PM until 8:00 PM. Funeral Services will be conducted Wednesday, October 31, 2012 at 2:00 PM from the Chapel of Jones-Wynn Funeral Home in Douglasville with Pastor Robert Gardner officiating. Interment will follow at Crest Lawn Memorial Park in Atlanta. The following will serve as pallbearers: Ralph Hawthorne, Kenneth Bowen, James H. Hurst, Jr., Jacob Hurst, Joseph Hurst and Scott Hawthorne. In lieu of flowers, memorial contributions in her memory may be made to the Hospice of the Golden Isles, 1692 Glynco Pkwy, Brunswick, GA 31525 or the Center for the Visually Impaired, 739 West Peachtree Street, N.W., Atlanta, Georgia 30308. Messages of condolence may be sent to the family at www.jones-wynn.com. Jones-Wynn Funeral Home & Crematory, Inc. of Douglasville is in charge of arrangements. 770-942-2311

Honor the life of Sviller Hurst

Please share a condolence, photo or memory of Sviller. We welcome all condolences that are positive and uplifting that will help family and friends heal.