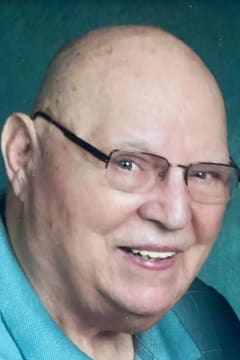 Russell Richard Hackert, age 84 of Douglasville, passed away Saturday morning, June 11, 2022. He was born on July 7, 1937 in Chicago, IL to Richard and Veronica (Mandl) Hackert. On September 21, 1963 he married his wife of 58 years, Arlene (Marchi) Hackert.
Russ was an avid athlete, playing football for the St. George High School Dragons (Evanston, IL) and later for Marquette University. In 1953, he was part of the St. George football team that won the Chicago Prep Bowl. He also played football and was a track athlete for Marquette University. After graduating from Marquette in 1959, Russ continued to be active in sports, taking up the game of golf and spending countless hours coaching his children in little league, football, and other sports.
Russ proudly served his country as a Marine, serving on active duty from 1959 to 1963. After active duty he served in the Marine Corps Reserves, retiring with the rank of Major in 1979. He retired as a Sales Representative in 1998 and relocated to Douglasville, GA in 2006.
He is survived by his wife, Arlene; son, Paul Hackert; daughter, Kris and her husband Bert Garnes; sister, Cheryl Bentson; and niece, Kat (Bentson) Springer. In addition to his parents, he was preceded in death by his son, Steve Hackert and sister, Valerie Hackert.
A service for Russ and his son Steve will be held at Kolssak Funeral Home in Wheeling, IL on August 13, 2022, with the Rev. Herbert Garnes, III officiating. Visitation Hours will be from 1:00 to 3:00 p.m. with the service at 3:00 p.m. In lieu of flowers, memorial contributions can be made to the ASPCA (http://secure.aspca.org/donate) or the Marine Corps Heritage Foundation (https://marineheritage.org/).