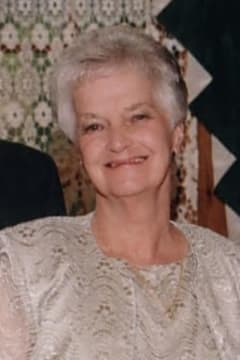 Mrs. Rosalie Fowler Matlock, age 88 of Douglasville, Georgia passed away Saturday, September 5, 2020. She was born July 30, 1932 in Washington DC, the daughter of the late Mr. Ezra Francis Fowler and the late Mrs. Katherine Mary Muldoon Fowler. Rosalie was the first woman motor vehicle examiner in the state of Nebraska and later worked as a telephone operator at the University of Nebraska Hospital. She loved to welcome friends and family into her home with a fresh cup of coffee. She was a proud Irish Catholic.

Rosalie is predeceased by her beloved husband, Howard Matlock. In addition, she was predeceased by son, Jerome Shawanesse, nephew Ronald Wilson and several brothers and sisters.

Messages of condolences may be sent to the family at www.jones-wynn.com. Jones-Wynn Funeral Home of Douglasville is in charge of the arrangements. 770-942-2311

In lieu of flowers, donations may be made to Douglas County Special Olympics Therapeutic Board.

Dearest Matlock Family, There are so many memories I could share. I loved Lee. She was a strong, confident and selfless woman. Lee was such a big part of my life in Cheyenne. She and my Mom were together almost everyday. My Dad and Howard could visit for hours on end about every subject and never seem to disagree on anything! Our families shared so many evenings, events and life struggles together. My life, my family’s life was much richer because of Lee, Howard and all of you. Much love and hugs to John. All of you are in my heart and thoughts. Love, Amy
– Any Wetering
Shirleen, Susan & John, I fondly recall your mother and Howard during Darel and Micky’s years in Cheyenne. They were the kindest couple and special friends to my parents. When my brother Dan passed away in ’82, your parents let us use their car and returned to S.D. with us. They were such a comfort. Lee had an ability to live a happy life regardless of adversity. Both of my parents really enjoyed spending time with them and I know they had a nice visit to Georgia. Darel died in March ’11. Mom lives in Sioux Falls but is now visiting at my sister Cathie’s in KC. Lee was always doing whatever she could to assist all of you however possible, truly loyal! All my best. God bless both Lee and Howard and grant unto them eternal life. Bill Wetering Worthington, MN
– Bill Wetering