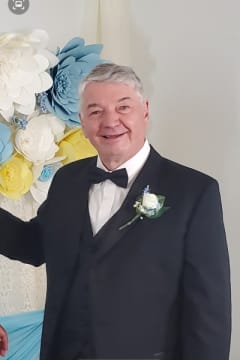 Mr. Richard Michael Andrusyna, age 69, of Carrollton, Georgia, passed away Saturday, January 2, 2021. He was born May 7, 1951 in Brooklyn, New York, the son of the late Mr. Joseph Andrusyna and the late Mrs. Helene Dundurs Andrusyna. Mr. Andrusyna was known by everyone as “Handsome”, which was what his wife affectionately called him. He was a quiet man but when he spoke, it was either insightful or hysterical. Together with his wife, he loved to travel, display hospitality and drink good wine. He was a true friend, loving, and good at everything.
He is survived by his wife of over 23 years, Mrs. Dorinne Lou Hock Andrusyna of Carrollton; his children, Kimberly Andrusyna, Derek Andrusyna and his wife, Allison, Liza McCall and her husband, Jesse and Christopher Michael Andrusyna and his wife, Jessica, all of Sacramento, California; seven grandchildren, Isobella Andrusyna, Fiona McCall, Mia James, Jack McCall, Gweneth Andrusyna, Jaxon Nguyen and Juliette Andrusyna; and our “Chosen family”.
The family will receive friends at Jones-Wynn Funeral Home of Villa Rica, Sunday, January 10, 2021 from 1:00PM until 4:00PM. Funeral Services will be conducted from the Chapel of Jones-Wynn Funeral Home, Villa Rica, Sunday, January 10, 2021 at 4:00PM with Zoom streaming details to follow.
In lieu of flowers, those desiring to do so may make donations In Memory of Richard Andrusyna to Go Fund Me at https://gofund.me/75413b20
Messages of condolence may be sent to the family at www.jones-wynn.com. Jones-Wynn Funeral Home of Villa Rica is in charge of the arrangements. 770-459-3694

SORRY, A FRIEND.
– Peter Kaufman
Our heart goes out to the wife and family of dear Richie. We have warm memories of our vacations with he and Dorinne where we laughed and talked sometimes late into the night. We will cherish those memories for many years to come. We will now look forward to the day when life will be filled with only laughter and joy. No more death, no more tears. Life as it was meant to be. Until then, our hearts will ache until we see our dear Richie again. May Jehovah the God of all comfort sustain us until then.
– Cheryl Heyward