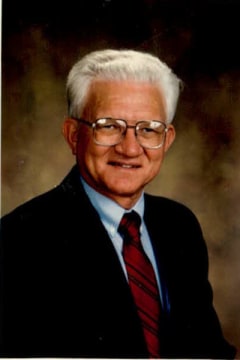 Rev. Horace Nathan Wilson, age 91, of Carrollton, passed away, Monday, May 4, 2020. He was born September 27, 1928 in Bremen, the son of the late Mr. William Absolom Wilson and the late Mrs. Eva Mae Golden Wilson.
Rev. Wilson graduated from Carrollton High School in 1946 where he played football for the Carrollton Trojans. He was inducted into the Trojan hall of fame for football, basketball and baseball. He received his bachelor’s degree in Education from West Georgia College. He served two years in the United States Army as Sargent during the Korean War. He served as Pastor of seven churches from 1954 until 2012. He was a loving husband, father, and grandfather. Rev. Wilson was a real man of God. He loved the Lord with all his heart and preached “repentance” for salvation for all people. He loved people and loved pastoring. He faithfully attended Sunday School for 65 years without missing a Sunday. Now he is in the presence of the one he preached about.
In addition to his parents he was preceded in death by his brothers, Chester L. Wilson, William Roy Wilson, James Ralph Wilson; sister, Pauline Wilson Rush.
He is survived by his wife of 65 years, Willa Dean Barrow of Carrollton; daughters and sons-in-law, Denise and Rickey Bice of Hiram, Janet and Kevin Kersey of Villa Rica; sons and daughter-in-law, Mark and Sherry Wilson of Carrollton, Don Wilson of Carrollton; eleven grandchildren, Nathan and Michele Bice of South Dakota, Seth and Katie Bice of Dallas, Leah and John Brother of Sarasota ,FL, Phillip Wilson of Carrollton, Kelly and Brad Smith of Bremen, Ryan Wilson of Carrollton, Jeffery Wilson of Carrollton, Alix and Chris Fincher of Villa Rica, Aimee Kersey of Atlanta, Anna Kersey of New York, and Ben Kersey of Villa Rica; sixteen great-grandchildren, Jennifer, Lane, Jay, Hannah, Jacob, Evan, Ella Grace, Owen, Lily, Abby, Moriah, Katelynn, Elena, Stella, Jett and Cora; two sisters-in-law, Bonnie Wilson of Carrollton, Carolyn Laney of Carrollton; several nieces and nephews also survive.
We are still providing services to our families based on CDC COVID- 19 guidelines. Virtual visitation will be conducted Friday, May 8, 2020 from 5:00 PM until 7:00 PM. Private Graveside services will be conducted at Shady Grove Baptist Church in Carrollton. Interment will follow at Shady Grove Baptist Church.
Messages of condolence may be sent to the family at www.jones-wynn.com. Jones-Wynn Funeral Home, Inc. and Cremation Services of Villa Rica in charge of arrangements. 770-459-3694

Dearest Janet and family, Please know that I am praying for you, and all of your family, in the loss of your earthly father – a true saint of God’s kingdom!! I was blessed to hear him preach several times over the years, and he truly taught the Word of God. The death of a loved one is bathed in sadness at the loss we feel. At the same time it’s a joyous occasion when we as Christians have the assurance that loved one is now rejoicing in Heaven!! With love, Dianne Jackson
– Dianne Jackson
Few people have had a greater influence on my life than Horace Wilson. He was genuine, studious, steady and loving. Thanks, dear friend, for the example you offered.
– Jimmy McAdams
I have known Bro. Horace Wilson for many, many years. He faithfully preached the Bible, and his life was a Godly example to others. He was truly dedicated to the Lord. I was blessed to have had him for my Pastor for a long time. Bro. Wilson was a true friend to our family and he will surely be missed. My thoughts and prayers are with the family at this time.
– Ethyleen Tyson
Bro. Horace was definately met on the 4th by his Savior with open arms and a welcome home my child you have been a good and faithful servant. The heavens rejoice as we mourn the loss of an extraordinary man. We will be in prayer for his sweet wife and family as they grieve this great loss. The world was definitely a better place with him in it and he will be greatly missed!
– Tranice Garner
Over the years, I’ve never known anyone who lived their life with the same message he preached. He was a role model for all to follow! He will be missed! My deepest sympathies to the family!
– Anthony Wilkins