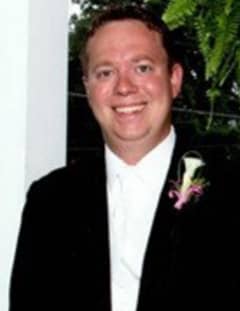 Mr. Paul âDanielâ Steenrod, age 35, of Temple, passed away October 24, 2018. He was born in Atlanta, GA, the son of the Paul Joseph Steenrod and Cheryl Ann Ethridge Steenrod. Daniel was a 2001 graduate of Villa Rica High School. He worked in sales at Sysco for four years. Daniel was a fan of Georgia Bulldog football, enjoyed Southern rock music and loved his children.He was preceded in death by his grandfathers, Paul C. Steenrod and Roy Edward Ethridge. He is survived by his wife of over ten years, Mrs. Lindsey Howarth Steenrod, his son, Miles Steenrod and his daughter, Aubrey Steenrod, all of Temple; his father and step-mother, Paul Joseph Steenrod and Karen Copenhaver of Douglasville; his mother, Cheryl Ann Steenrod of Carrollton; his brother and sister-in-law, Robert Edward and Michaela Ethridge of Carrollton; his grandparents, Charlie and Linda Hand of Douglasville and Bill and Dorothy Stevens of Tybee Island; his in-laws, Brian and Janet Howarth of Temple; and his niece, Addie Ethridge and his nephew Ty Ethridge also survive. The family will receive friends at Jones-Wynn Funeral Home in Villa Rica on Monday, October 29, 2018 from 4:00PM until 7:00PM. A Service will be conducted in the Chapel of Jones-Wynn Home, Monday, October 29, 2018 at 7:00PM following the visitation. A Celebration of Danielâs life will be announced at a later date. DanIn lieu of flowers, donations In Memory of Paul Daniel Steenrod can be made to Miles and Aubreyâs Education Fund Account % Robin Dyer, #1000246281215 at any SunTrust Bank location.Messages of condolence may be sent to the family at www.jones-wynn.com. Jones-Wynn Funeral Home Inc. and Cremation Services of Villa Rica in charge of arrangements. 770-459-3694

Honor the life of Paul Steenrod