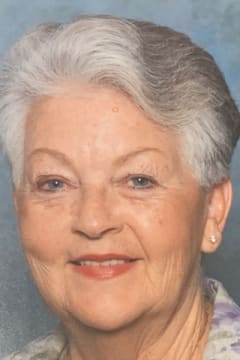 Mrs. Mary Lue Gantt Land Smith, age 81 of Villa Rica, Georgia passed away Wednesday, May 27, 2020. She was born October 15, 1938 in Villa Rica, Georgia the daughter of the late Mr. James Clarence Gantt and the late Mrs. Ola Long Gantt. Mrs. Smith was a graduate of Villa Rica High School in 1957. She worked for the C&S Bank in Atlanta for twenty-eight years. After retiring she enjoyed traveling, volunteering at Tanner Hospital, being part of a bowling league, spending time with her children, grandchildren, great-grandchildren. She loved her family, the Lord, and singing hymns. At her home at the Benton House she continued to laugh and sing and dance. She was a blessing to so many. One thing remained constant, you could count on being greeted with a hug and kiss and always bid goodbye with a hug and a kiss. As long as she could, she would walk her family members to their cars and wave goodbye with warnings to be careful and drive wide open.
In addition to her parents, she is preceded in death by her husbands, Thomas Edgar Land , married Aug. 1957 – May 1982; Harold Wilbur Smith, married 1988 – 2002; brother, David Gantt; sisters, Betty Jean Gantt Lee, Sybil Gantt Chapman.
Mrs. Smith is survived by daughter and son-in-law, Donna Land and Gary Bowlick; son and daughter-in-law, John Land and Kathleen Denson; three grandchildren, Joshua and Jeanna Wilder Bowlick, Hillary Bowlick and Brian Cranford, Johnathan Land; five great-grandchildren, Emery Bowlick, William Bowlick, Mason Cranford, Grady Cranford, Karina Land; sisters, Bonnie Gantt Price, Brenda Gantt Bain, Susie Gantt Noles; brother, Wayne Gantt; many nieces and nephews.
A Private Graveside Service will be held.
Messages of condolence may be sent to the family at www.jones-wynn.com. Jones-Wynn Funeral Home of Douglasville is in charge of the arrangements. 770-942-2311.

Donna, just heard about your Mother’s passing. I remember her beautiful smile and always enjoyed talking with her when I would visit my Mom. My thoughts and prayers are with you and all your family.
– Patti Crawford
I remember Mary’s beautiful smile and positive attitude. I always felt at home in her presence. My thoughts and prayers go out to the family. Know that Mary made a difference in so many lives. She will be missed immensely.
– Brenda Crawford
Donna and family, I’m so sorry to hear about Mary. She was a sweet and caring lady. I have so many memories of her as a classmate and friend. My deepest condolences to all of you during this difficult time.
– Jane Nixon
Donna & Johnny and your entire family. We are very saddened to hear about your mother, grandmother, great grandmother and mother-in-law. Remember all the fun times. You know she loved when you would play the piano and sing her favorite songs. May she rest in PEACE in HEAVEN. Love Janet & Paul Newton
– Janet Newton
With deepest condolences as you prepare and gather to share the memories, continue her legacy, and fondly send her on her journey in a good way,
– Karen Wolfe
We are so very sorry to hear about Mary. She was the sweetest lady and we are very fortunate to have called her a friend. Heaven gained a beautiful angel. Prayers for the family. We love you Wayne and Shirley.
– Ricky and Wanda
Donna, I am so sorry to hear about your Mother. You and your family are in my prayers. If there is anything I can do for you, please give me a call.
– Debbie Mayfield