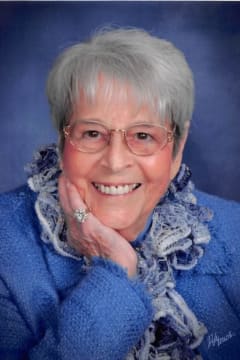 After graduating from high school, Jo served in the United States Air Force as an air traffic controller at Hamilton Air Force Base, California where she met and married the late Robert (“Bob”) Lamont Farish of El Reno, Oklahoma. They wed in 1950 and were married for 63 years at the time of Bob’s passing. During Bob’s Air Force career of 22 years, the family lived in numerous countries, states, and cities around the world. After retirement, Bob and Jo settled in the Carrollton area with Bob becoming the general manager of Fairfield Plantation and a contractor while Jo pioneered the real estate industry for women in the area beginning in 1979 when she opened the Century 21 Farish Realty office in Carrollton which is still serving the area today as Farish Realty and Associates. Jo displayed a strong work ethic throughout her life and career. During her tenure as a real estate broker, Jo earned countless professional accolades and served her business community in numerous positions at the local, state, and national level. Jo helped start the Tri-Counties West Board of Realtors, serving as its first female President in 1984. She also served as Regional Director of Governmental Affairs for the Georgia Association of Realtors for several years. As a prominent leader in the real estate community, Jo held countless committee posts and was recognized by her peers as the first inductee into the West Metro Board of Realtors Hall of Fame. Jo was also a distinguished member of the Pilot Club of Carrollton, serving as its President five times and as Governor of the Georgia District of Pilot International on two occasions. As Governor, Jo enjoyed traveling the state and visiting all the local Pilot chapters. Jo also served enthusiastically on various committees throughout her tenure as a member of the Pilot Club.

Jo was an exemplary Catholic woman of faith and an active member of Our Lady of Perpetual Help Catholic Church in Carrollton, serving tirelessly over the years in various capacities. Her involvement included serving on the finance committee, acting as its Chairman for many years, singing in the choir, and serving as a lector. When she wasn’t busy with these jobs, she could be found chairing the fundraising committee and bringing the Eucharist to the homebound. She loved her church and loved her time that she spent there.

Those fortunate enough to have known Jo will always remember her for her sharp sense of humor, infectious laugh, and generous giving nature. Jo was famous for starting all meetings, professional or otherwise, with a funny joke, which everyone came to expect and enjoy. Jo was a proud veteran who always wore her American flag pin on her lapel. She loved nothing more than to have her big family together for holidays, most especially Christmas, for which she put on an unrivaled celebration year after year. Jo was an avid supporter of charitable causes, great and small, especially organizations supporting veterans, Catholic international charities, and St. Jude’s.

The family invite all to celebrate her beautiful life with us at Our Lady of Perpetual Help Catholic Church, 210 Old Center Point Road, Carrollton, Georgia 30117, where a Mass officiated by Rev. Fr. Gaurav Shroff will be held in her honor Monday, June 28, 2021 at 10:00 am. A Rosary will be said for her in the church preceding the Mass at 9:30 am. The family will hold a reception with food and refreshments in the Carroll Center directly after the Mass and graveside inurnment with military honors rendered by the United States Air Force Honor Guard. All are welcome!

Those desiring to do so may make donations In Memory of Mary Joyce “Jo” Farish to St. Jude Children’s Research Hospital, 301 St. Jude Place, Memphis, TN 38105.

My memories of this lady are happy ones. She always had a smile on her face for evwryone she met. Vikki and I are best friends and have been since Junior High School, so I can say that even when she had to fuss at the two of us she still ended it with a smile. To her family I offer my prayers and im so sorry you lost this wonderful lady. Love Peanut
– Peanut Kilby

I was so blessed that I was fortunate to finally meet my cousin Jo several years ago -we had a wonderful afternoon sharing photos and family stories. We talked many times on the phone after that and she impressed me with her genuine spirit, kindness and humor. I will never forget her.
– Kathy Rossettie
Jo was a very sweet lady and friend, as well as mentor for those in Pilot Club. She loved to travel to as many Pilot events as she could and always made an impression on those who she met. I know that she will be missed by all who knew her.🙏🙏🙏 for her family.
– Deborah Cogburn

Prayers for the family and friends of this lady who will be truly missed. www.griefshare.org
– Wendy
Jo was an amazing women that inspired so many of us. The best mentor in the real estate industry and leader in the community. You were all blessed to call her your Mom!
– Debbie Brock

Jo was an asset to the Carroll County community and Our Lady of Perpetual Help Church community. Prayers for family.
– Ken and Mary O’Neill

Jo was a beautiful lady inside and out. She always made me feel like one of her best friends. Prayers for all of her family.
– Pat Johnson

– Bonnie J. Hawkins
Tanner Hospice Care staff would like to offer our condolences to you during this difficult time. We appreciate you trusting your loved one in our care.
– Tanner Hospice

Prayers for you all! Jo was a wonderful woman that made deep impressions in so many people’s lives…Always a smile! Fly High Jo!!!
– Angie Crews