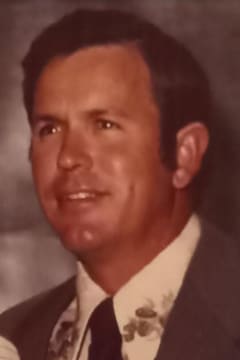 Mr. Lloyd V. Stepp, age 82, of Winston, GA, went to be with his Lord and Savior on December 26, 2021, after a 15 year battle with Parkinson’s. He was born February 15, 1939, in Picher, OK, the son of the late Mrs. “Mattie” Lee Boyd-James and “Pete” Stepp. Lloyd proudly served in the US Air Force as a member of the Air Police and was later employed by the Exxon Oil Refinery in Benicia, CA, from which he retired after more than 25 years. Lloyd played in a competitive fast-pitch softball league as one of the league’s most competent pitchers, and also enjoyed golf, fishing, and camping, and most recently greatly enjoyed Dr. Charles Stanley’s televised sermons. Lloyd is preceded in death by his parents and his brothers “Sonny”, Everett, Lester, and David. He is survived by his wife Linda Lee Stepp, his daughter and son-in-law Christine and Robert Beaudreau, his son Tim, grandchildren Matthew, Jeremie, Courtney, and Maverick, great-grandchildren Morgan, Brielle, Louden, Nico, and Josie, as well as many nieces and nephews. The Reverend Danny Horsley will officiate a graveside service which will be held at the Georgia National Cemetery in Canton, GA., later this month.