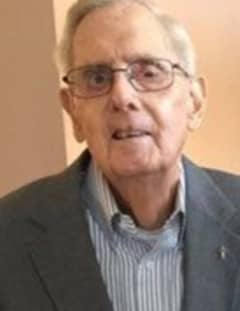 Rev. Leon Mitchell Jeffords, age 85, of Douglasville, went to his heavenly home, Saturday, November 17, 2018 surrounded by family after a brief illness and stay at Wellstar Douglas Hospital. He was born September 14, 1933 in Timmonsville, SC, the son of the late William Albert Jeffords Sr. and Maude Ward Jeffords.As a young pastor he enjoyed spending time as a church camp counselor. He was a favorite square dance caller both at church and neighborhood events. He had a competitive spirit in all sports, but particularly as the First Presbyterian Church womenâs softball coach and menâs softball ace first baseman. He enjoyed golfing, hunting, and fishing. He never missed watching the Georgia Bulldogs and the Atlanta Braves. He cherished time with his family during family vacations, holidays, and Sunday lunch After graduating from Presbyterian College and Columbia Theological Seminary, he served churches in Alabama and South Carolina. In 1969 he began serving as pastor at First Presbyterian Church Douglasville where he faithfully served for 29 years. He also served his community in many ways including Wellstar Douglas Hospital chaplain, Ministerial Association, Retardation Association, Good Samaritan Center, Homeless Shelter, Library Board, and Kiwanis Club. In addition he was honored as Douglas County Citizen of the Year and by the Georgia House of Representatives. He also served his country in the Air Force during the Korean War. In addition to his parents he is preceded in death by two brothers, Jeff Jeffords and Herbert Jeffords. He is survived by his wife of 65 years, Betty Jeffords, daughters and sons-in-law; Beverly and Tom Butler, Patsy and Jerry Johnston, Libby and Joe Wilbanks, grandchildren; Will Rice (Harmony), Ben Butler (Alison), Polly Grauso (Chris), Ally Dawson; great grandchildren; Baby-to-be Rice, Ella and Evie Butler, JT and Mitchell Grauso; sister, Ann Wright (Bill); brother, Tommy Jeffords (Carol); as well as many beloved nieces and nephews. The family will receive friends Wednesday, November 21, 2018 from 11:00 AM until 1:00 PM at The Jeffords Center at First Presbyterian Church of Douglasville. Memorial Services will be conducted Wednesday, November 21, 2018 at 1:00 PM from First Presbyterian Church of Douglasville. In lieu of flowers the family asks that contributions be made to The Leon Jeffords Memorial Fund at First Presbyterian Church, 9190 Campbellton Street, Douglasville, GA 30134.Messages of condolences may be sent to the family at www.jones-wynn.com. Jones-Wynn Funeral Home and Crematory in Douglasville are in charge of the arrangements. 770-942-2311

Honor the life of Leon Jeffords

Please share a condolence, photo or memory of Leon. We welcome all condolences that are positive and uplifting that will help family and friends heal.