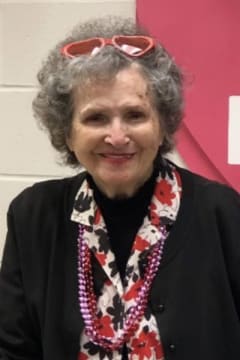 Lela Love Vinnia Avelle “Jerri” Long, 93, of Sciotoville, OH, formerly of Villa Rica, GA finished her race at home on Sunday, November 1, 2020, All Saints Day, surrounded by her family. Jerri was born in Gant, Alabama, and was the youngest daughter of the late George Washington Williams and Rosa Effie Dell Lee.

She was married 53 years to the late Ernest Long.

Along with her husband and parents she is preceded in death by her son and daughter-in-law, Bruce and Peggy Long, two brothers, Emmanuel Lee Williams and James Everett Williams and five sisters; Lelia Estelle Davis, Minnie Lee Williams, Myra Zelle Smith, Lillie May Belle Williams and Daisy Idelle Purdue.

She got a kick out of sharing her full name and being the youngest her mother called her “Baby.” She received the nickname “Jerri” by a grammer school teacher. She also loved sharing the names of her siblings as they were a true Southern family. When asked where she was born, she always gave her favorite answer, “LA” Lower Alabama. Then she would flash that beautiful signature smile.

At a young age Jerri was a manicurist, then later became a door to door saleslady for several cosmetics companies she was also an excellent seamstress that lead her to work at Cluett & Peabody Arrow Shirt Co in Breman, GA where she retired after 26 years. After retirement her love of people and fun took her to Six Flags over Georgia where she ran games and had a blast! She earned top sales as a food demo lady in several local grocery stores in the Metro Atlanta area, she logged hundreds of miles on her stationary bicycle and loved gardening and home canning. During her residency in Portsmouth, OH she participated in two Guinness World Records.

She was a member of the Gold Dust Park Senior Center in Villa Rica, GA, a member of the Hunter Park Seniors of Douglasville, GA, and an active and faithful member of Ephesus Baptist Church family since 1967. She attended Bonser Run Baptist Church while she lived in Ohio. Jerri resided at Riverview Retirement Center in Portsmouth, OH for 3 years where she made a new family tree with all of the residents. She spent many days with friends at the USSA Adult Daycare in Portsmouth. They too became like family.

Jerri’s hands were rarely still and she would always say, “can’t never could.” That seemed to be her philosophy. She was devoted to reading God’s word daily until her eyesight failed. Through the years she was an encouragement and inspiration to hundreds. Jerri was an extraordinary, virtuous, kind and patient woman that had a zeal for life and a passion for Jesus. She was a real trooper and fighter all the way to the end. She fought a good fight and said several times that she wasn’t giving up but given out. Her race may have ended here but now she is dancing on the streets of gold and hugging everyone she meets with her beautiful smile and charm.

Mrs. Long will lie in state at the church from 1:00 PM until 2:00 PM. Funeral services will be held at 2:00 p.m. on Wednesday, November 4, 2020 at Ephesus Baptist Church in Villa Rica, GA with Pastor, Billy Godwin officiating. Funeral Arrangements are under the direction of Jones Wynn Funeral Home in Villa Rica, GA. Interment in the church cemetery.

The family would like to thank all of the friends and family that sent messages and cards and the nurses from Hospice that showed kindness and compassion in these difficult days.

In lieu of flowers, please send donations to the Ephesus Baptist Church Building Fund in Villa Rica, GA and to the USSA Adult Daycare in Portsmouth, OH.

It brought back so many memories of Winston School when I saw your mom’s obit…such a kind lady growing up. Bruce was always a special guy and was sorry to hear of his passing also. May their memories always be in your heart. Prayers for peace. It was a blessing to know your family… Arubra Hembree, Class of 1971…
– Arubra Hembree
We all loved her at Bonser Run Church she was a wonderful person always with a smile and great wisdom I have never read a more suitable or beautiful obituary perfectly written for her God bless you all
– Judy Riggs
I am so sorry to hear of Jerri’s passing. She was a wonderful and sweet lady. She and my Mother, Sara were dear friends. I am praying for the entire family during this time. Sending love and hugs, Diane Williams Duncan
– Diane Duncan
Ernette, I am sorry for the loss of your Mom. She was such a sweet lady and good friend to my Mom. I’m out of town so won’t be at the service, but I’ll be praying for you. Love you!
– Becky Alexander