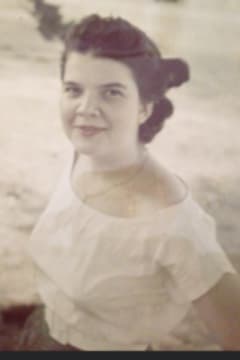 Born 1937 in Brooklyn, New York to Anna (Schorn) and Kilian Uebel. A first generation American on her father’s side, she was the middle sister to older brother Robert Uebel and younger brother James Uebel. Josephine met her husband, Bill (Willie) in New York. Bill and Josephine bought a dairy farm in New Jersey shortly after they married. Josephine had her first seven children in New Jersey before moving to North Carolina where they continued the dairy farm business and had two additional children. To supplement their income, Josephine raised German Shepherds and Shelties, had a thriving kenneling business, and a beautiful Iris nursery. She also wrote articles for the local paper and enjoyed traveling to see her children around the United States and Korea. Josephine later moved to New Mexico where she worked at Queen of Heaven School as a library assistant. She retired in Georgia but volunteered at her grandchildren’s elementary school. Josephine sponsored numerous children and adults through Catholic charities in other countries.
She is survived by all nine of her children: William Hayes (Teresa), Richard Hayes (Gayle), Mary Kesner (Ben), Gladys Hayes, Mark Hayes (Donna), Annette Treutlein (Dennis), Lisa Metts (Kevin), Matthew Hayes (Christine), and Jenny Rupert (Mark). She had 18 grandchildren, 10 great grandchildren, and 2 great-great grandchildren. She will be deeply missed by friends, family, and all that knew her.
A service will be held at a later date in North Carolina. In lieu of flowers, donations may be made to her church St. John Vianney at https://www.sjvpar.net/ or Wellstar Community Hospice at https://www.wellstar.org/.
Messages of condolences may be sent to the family at www.jones-wynn.com. Jones-Wynn Funeral Home of Douglasville in charge of the arrangements. 770-942-2311

I remember Jo fondly during the days when we were both raising our children in Old Dock. She was a woman with strong good moral convictions and always put her family first. She had a zest for life which shined brightly in her eyes complimented by her radiate warm smiles. When I first met Jo I felt a kindred spirit. Each visit was more memorable than the next. Some of the fondest memories was meeting the Book Mobile at her home which was one of its many routine stops. Her love for reading & education was instilled in her children. I remember the day she invited me into her home. I remember sitting at her long dinner table while she was preparing supper for her family. I marveled at how well organized the family’s daily routine was. The household ran like a ‘well oiled machine’ all because Jo loved her family. I was so privileged to have known her children. She was an exceptional mother & wife. I will never forget her. She made me a better person just for being her friend. She loved God and he has called her home. We can all live by the example she set until we see her again. Love & praying for God’s peace to the family.
– Joyce Ward Lane
I will always remember sitting at that long dining room table in NC. She was always sharing and caring. She was a very special person and everyone knew it. Who didn’t love her! I will miss you!
– Mindy Uebel
Jo and I shared our family in addition to having a great personal friendship. When my husband had open-heart surgery for aortic valve replacement, Jo brought her knitting and sat with me day after day. I cherish our conversations and time well-spent together. She blessed us each individually and collectively. She was a gifted musician who tirelessly played the organ in her church. Thank you God for blessing us with Jo Hayes.
– Norma Metts
I only met Jo a few years ago at church. She was this wonderful woman whose face lit up every time she saw me. She would give me a hug and whisper to me, “I love you”. I wish I had an opportunity to know her better. My heart and prayers go out to Jenny and her entire family. Jo will be missed.
– Cari Goslow
I am honored to be the God daughter of such an amazing and kind person . I admired her more than she will ever know .I admired her for her strength . Both in body and spirit .I grew up watching how hard she worked on the farm , with her cooking and caring for my grand parents and cousins .. never a compliant . And all done with love . I’ve never met a more giving and caring soul I have some great memories of my Aunt , and for that ,, I am blessed
– Vicky Foggan
Aunt Joe as I called her was one if the sweetest human beings I have ever met in my life …She was a favorite Aunt her gentle spirit Was infectious … When I went to SC to get married she wanted me to come by after wards she made a wedding cake for us … through the years she has always remember me at Christmas very much loved by many What a absolutely beautiful woman of God
– Nancy Hayes
When I think of Jo I will see her walking across the playground at the elementary school where I worked. Jo was so cute in her jumper dress, tennis shoes and socks with a big book bag. She would volunteer at the school as a tutor. Helping the children with their reading. I will remember so many cute memories of Jo. The bags and bags of riverbed rocks she collected from her backyard and would call me to pick up. Over the course of a year I had enough to rock the west side of my front yard! I remember her hugs and cheek kisses, her motherly love for her children and grandchildren and even their friends. 🙂 I’ll miss knowing you are here on earth with us Jo, but I am so glad to think that where you are now you are happy, whole and probably surrounded by beautiful farm country and puppies. I will love ya forever and miss you until we get a chance to see one another again. Till then thank you for gifting the world with Mary and her family, I’ll love them for just as long. Peace, hugs, laughter, joy…blessings of all God may give. Love, Debi
– Debi Nowaczek