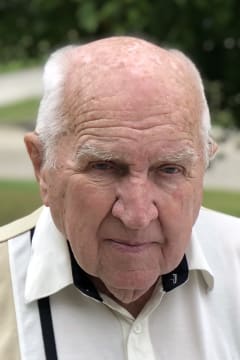 Mr. James “Jim” Edward Holloway, age 96 of Villa Rica, Georgia passed away Saturday, August 28, 2021. He was born October 13, 1924 in Lexington, Kentucky, the son of the late Mr. Henry Franklin Holloway and the late Mrs. Elizabeth Rebecca Johnson Holloway. Mr. Holloway proudly served in the United States Army, having served in Normandy during WWII. After his military service, he worked as an HVAC systems engineer for Brock-McVey. Mr. Holloway was Christian in faith.
In addition to his parents, he is preceded in death by his brothers, Reece Holloway, Henry Holloway, Bob Holloway, and Frank Holloway and his sisters, Jane Levi and Midge Wheeler.
Mr. Holloway is survived by his wife of over 72 years, Mrs. Mary Juett Holloway of Villa Rica; his sons, James Allman Holloway and wife, Diane Holmes of Orlando, Florida and Joseph Warren Holloway and his wife, Cheryl Holloway of Marietta; his brother and sister-in-law, Roy and Betty Holloway of Goldsboro, North Carolina; grandchild, Mary Ingram and her husband, Ryan Ingram of Marietta; great grandchildren, Andersen James Ingram and Graham Ingram; and several nieces and nephews also survive.
According to Mr. Holloway’s wishes, he was cremated. Inurnment with military honors will take place at Georgia National Cemetery in Canton, Georgia at a later date.
Messages of condolence may be sent to the family at www.jones-wynn.com. Jones-Wynn Funeral Home & Cremation Services of Villa Rica is in charge of the arrangements. 770-459-3694