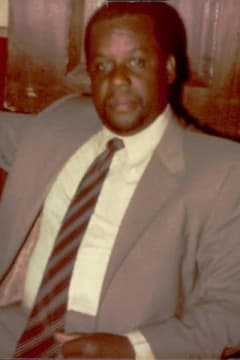 Horace Lexington Green was born on April 23, 1938, in Kingston, Jamaica to Annie Louise Wolfe and Joseph Green. Horace spent his first eight years in Kingston until, like most young boys his age; he started going to the seaside to swim. One day he jumped off a huge rock and nearly drown. My grandmother concerned for his safety sent him to the country “Harry Watch” to live with his grandparents Emma & Archibald Wolfe.
Although he did not want to leave his mother, he had a great childhood growing-up with his cousins that were like his brothers and sisters. Vilma, Van, Sylvia, Ted, Madge, Holly, Jeff, and Dutton; just to name a few. His cousins became his playmates, partners in crime, and classmates.
Horace excelled in school receiving A’s, especially in handwriting, and math. Horace and his cousins won many academic contests across their neighboring districts. Horace not only excelled at his schoolwork, but he also was very athletic excelling at cricket and other sports. He was also a trickster teasing and playing pranks on his cousins all in good childhood fun, while remaining a model child always obeying his grandparents and completing his chores and schoolwork.
Horace returned to Kingston at the age of 16 to attend Buxton High School then he went on to attend CAST College. While attending school Horace’s friend Scottie helped him to get a job at Jamaica Public Service. Being a dutiful son, he allowed his mother to quit her job and took care of her financially. In Kingston, he reunited with his cousins. He was known to be very generous often treating them to food, or a picture show (Dean Martin & Jerry Lewis is one of his favorites since he loved to laugh).
While in Kingston he also became part of the Jazz renaissance developing a passion for Jazz music that would last throughout the rest of his life. Jazz also led him to meet his dear friend Barry Brown, who would be his life-long friend and the Godfather to his eldest son. Barry and Horace spent many hours playing the records of all of the latest Jazz artist of their times (most times driving his beloved baby cousin Jean…who lived with him….crazy). He also spent time trading records and visiting the homes of his other friends who were also Jazz enthusiast Lecky, Dutton, and Tarp.
It was during this time he first saw a very beautiful young lady who was on her way to the market. Despite the constant pursuit from the young man, Heather did not stop to speak with him. Horace followed her home and returned every day to call on her. Trying to find a reason to see her again, Horace promised the young lady that he could help her get a job. After dating for a few years Heather Richards and Horace Green eventually were married on March 7, 1970 and went to live in America. They moved into the house where they would live for over forty years and raised their beloved children. Horace and Heather were married for fifty years and had four children Tania, Tricia, Horace, and Bradly. They also have one grandchild Zoe Green (Bradly’s daughter.)
Horace obtained his engineering degree from City College while working as an Electrical engineer for NYC Transit Authority. As a true Jamaican Horace also had multiple businesses in addition to his day job. Electrical Estimator, shipping business and finally he sold spices wholesale to Caribbean restaurants. He always believed in supporting black-owned businesses especially businesses that purchased from him. Which as kids we did not understand when we wanted to go to Red Lobster, and he insisted we go to “yet another” Caribbean restaurant.
Horace loved his family dearly and always put them first. He often said to us as kids that family is everything; and we are a wholesome and loving family. He was truly a family man. Horace worked very hard and instilled in us the value of a good education ( he always said that he could not give us great financial wealth but he can give us a great education; and we can get the wealth for ourselves).
Horace’s family values and hard work payed off. His diligence allowed all of his four kids the ability to go to college and take yearly summer vacations across the US and Jamaica. Horace was an advocate for education and helping his extended family to achieve that American dream. He opened his doors to many family members who wanted to come to America as well as providing monetary support or a job where he could. He was very proud that all his children received higher degrees. (Three MBAs and one DDS).
Although Horace and Heather moved to Villa Rica, Georgia in 2015; Horace remained a true New Yorker at heart. Horace was a Deacon St. Albans Congregational Church in New York City.
He often asked us “how’s my NY doing”. He missed the subways, Central Park (where he took his lunch when he worked in the area), and the beautiful buildings that were unique to New York City.
Horace is survived by his wife Heather his children Tania, Tricia, Horace, and Bradly; granddaughter Zoe; sister Hazel, Nieces Verdell and Michelle; cousins Van, Vilma, Sylvia, Ferron, Collin, Ted, Ricky, Nadine, Junior, Trina, Simone, and Gary etc.
The family will receive friends at Jones-Wynn Funeral Home of Douglasville, Saturday, February 6, 2021 from 10:00AM until 11:00AM. Funeral service will be conducted Saturday, February 6, 2021 at 11:00AM with Pastor Lloyd Dawkins officiating. Interment will follow at West Georgia Memorial Park in Carrollton, Georgia.
Messages of condolence may be sent to the family at www.jones-wynn.com. Jones-Wynn Funeral Home of Douglasville is in charge of the arrangements. 770-942-2311

Thinking of you all love Clara and Sericia
– Clara Richards