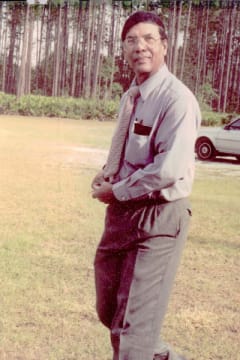 Mr. Herbert Stanley Pennicooke, age 88, of Douglasville, Georgia, passed away Sunday, November 8, 2020. He was born January 27, 1932 in St. Elizabeth, Jamaica, the son of the late Stanley Pennicooke and the late Imogene Pennicooke. He was a veteran of the United States Army having served during the Korean Conflict, where he earned 2 Bronze Stars. Mr. Pennicooke owned three supermarkets, one gas station/convenience store and discount liquors in Flagler Beach, Florida. He loved to farm, loved his wife and family and was of the Protestant faith.

He is survived by his wife of almost 68 years, Mrs. Shirley Nelson Pennicooke of Douglasville; his daughter, Rita Fasina-Thomas of Douglasville; his son and daughter-in-law, Cintron and Kathy Pennicooke of Portland, Oregon; four grandchildren, Nicole, Sean, April and Folasade; six great-grandchildren; and several nieces, nephews and numerous cousins.

Private services will be conducted. In accordance with Mr. Pennicooke’s wishes, he will be cremated.

Our heart and prayers are with you during this time and beyond. We know you will miss him as we all will miss his stories and his love of his family that he shared whenever I would visit. May he rest in peace and in the love of God!
– Tarenia Carthan
My condolences to each of you. Continuing to keep you in prayer as you go through this time. Love you all
– Valerie Collins