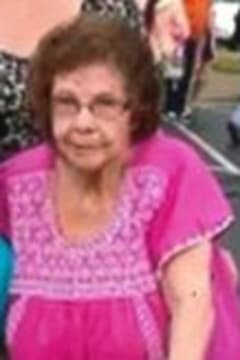 Helen Louise Ellis, 86, of Bremen Georgia, passed away on May 22, 2022. She was born on June 17, 1935. She is the daughter of the late Davis Young Henderson and the late Clara Smallwood.
She loved her family dearly and adored her grandchildren. She enjoyed watching soap operas. She was of the Baptist faith.
In addition to her parents, she is preceded in death by her husband, Paul Hollis Ellis; brothers, Jerry Henderson and Danny Henderson; daughter, Vickie Gover. Survivors include her daughters Terry and Wes Conley of Centre, Alabama, Dena and Scott Rosenbaum of Temple, Georgia; son, Dave Anthony Mason of Bremen, Georgia; sister Gail Henderson of Conyers, Georgia; brothers, Larry Henderson, Terry Henderson and Jeff Henderson all of Conyers, Georgia; sixteen grandchildren; thirty-four great grandchildren; several nieces and nephews; special friend Hazel Harden.
The family will receive friends from Jones-Wynn Funeral Home Villa Rica Chapel on Thursday, May 26, 2022 from 11:00 AM to 1:00 PM. The funeral service will begin at 1:00 PM. Interment will be at Meadowbrook Memory Garden with Dr. Corky Addison and Rev. Tim Stephens. The following men will serve as pallbearers: Chris Conley, Donnie Gover, Stone Jones, Anthony Mason, David Mason, Brian Mason and Cason Young.
The family would like to thank Sacred Journey Hospice for the kindness and love.
Messages of condolence may be sent to www.jones-wynn.com Jones-Wynn Funeral Inc., and Cremation Services of Villa Rica Georgia is in charge of the arrangements. 770-459-3694