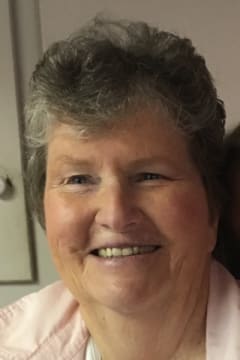 Mrs. Fredda “Jo” Todd Blankenship, age 77, of Kennesaw, Georgia passed away Saturday, February 20, 2021. She was born in Toccoa, Georgia on September 17, 1943, the daughter of the late Mr. Arlo Todd and the late Mrs. Gladys Dodd Todd. Mrs. Blankenship was a homemaker, who also had an arts and crafts business with her dear friend, Wylene Daniel. She loved to work in her flower and vegetable gardens, enjoyed travel, and delighted in spending time with her grandchildren.
In addition to her parents, she was preceded in death by her sisters, Helen Walters Davis of Toccoa, Georgia, Betty Todd Heaton of Mt. Airy, Georgia, and Shirley Todd Kubek, also of Toccoa, Georgia.
Survivors include her husband of 57 years, Mr. William Thomas “Bill” Blankenship of Kennesaw; her sons and daughters-in-law, Michael Thomas Blankenship and Valerie Blankenship of Cartersville and David Scott Blankenship and Kelli Watson Blankenship of Villa Rica; her daughter, Amy Blankenship Baker of Canton; her grandchildren, Avery Nicole Baker, Asa Devane Baker, Alex William Baker, and Tandy Elise Blankenship; her sister, Lois Barron of Mt. Airy, Georgia and her brother and sister-in-law, Ernest Verner Todd and his wife Peggy, of Auburn, Alabama; brother-in-law and sister-in-law, Richard Blankenship and his wife, Marlese, of Dayton, Ohio; and numerous nieces and nephews also survive.
As per her request, Mrs. Blankenship will be cremated and her cremated remains will be placed on the grounds of her childhood home in Habersham County, overlooking the North Georgia Mountains. Her family will gather for a celebration of her life at a later date.
Messages of condolence may be sent to the family at www.jones-wynn.com. Jones-Wynn Funeral Home of Douglasville is in charge of the arrangements 770-942-2311.

So sorry for the heartache you are going through. May your mom rest with the Angels ❤️🙏🏻😇
– Debra Ivey

Mr. B, Michael, David, Amy and family. On behalf on the Gilberts, we send our most sincere condolences. Some of our fondest childhood memories were with the Blankenships. Whether it was cutting firewood in the middle of nowhere, baseball, football, swimming or riding the go-cart around your yard. The Blankenships seemed like a second home for Trevor and I for so long. I’ll will also never forget the milkshakes Mrs. B would make us with her homegrown strawberries. We understand the pain you all are feeling but the wonderful memories will be with you all forever.
– Rodney Gilbert
The home I grew up in backed up to the Blankenships. It was a 2nd home really and Mr. and Mrs. Blankenship were always welcoming. Mrs. Blankenship probably saved my life a few times from the boys coming after the annoying neighbor kid (me) that was 10 years younger. I climbed every tree in that front yard and remember swimming in the pool when the boys put minnows in there. Mrs. Blankenship was always there to patch me up or give me a cookie. All our love to your family during this time! Matt Brott
– Matt Brott
So sorry to hear of Jo’s passing. Lots of memories of our boys beating a path through the woods between our houses. May she rest in peace. Priscilla and Dale Brott
– Priscilla Brott

Amy & Bill, I am so sorry to hear about Jo. This breaks my heart. Your family has meant so much to our family since we moved to Kennesaw in 1979 but then left there in 1985. We have not stayed in close contact but have thought about each of you so many times. With my deepest sympathy, Brenda Calhoun
– Brenda Calhoun

There will never be someone like Grandma Jo again. Avery and I will talk about her for the rest of our lives. Her memory will live on through our family for generations to come. I want to leave her one last promise here that her granddaughter Avery will be loved and cared for unconditionally for the rest of her life. Thank you for the warm memories, I love you. – Sam Ivey
– Sam Ivey

My heartfelt sympathy and prayers go out to Amy Baker and all her family.
– Brenda Daly

A special lady that will be missed by many. Our deepest condolences. Bobbye Jean, Coy, and Jamey Baker.
– Janey Baker