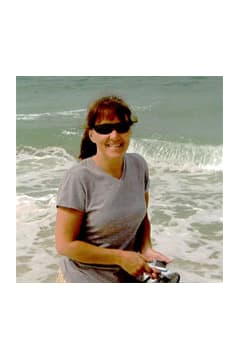 Mrs. Ellen Bolan Putnam Grover, 49, of Villa Rica, Georgia passed away Monday, June 20, 2016. She was born November 29, 1966 in Marietta, Georgia, the daughter of the late Mr. Alvin Ward Bolan and the late Mrs. Betty Jean Underwood Mathis. She worked as a stocker at the Walmart in Acworth. In addition to her parents, she was preceded in death by her daughter, Delena Weathers in 2009 and her stepfather, Loyd Smith. She is survived by her husband, Robert Eugene Grover, Sr. of Villa Rica; daughters and a son-in-law, Elizabeth Putnam of Temple; and Lauren and James Thompson of Carrollton; son-in-law and daughter-in-law, Ty and Amanda Weathers of Carrollton; sister and brother-in-law, Jayla and Bart Austin of Carroll County; brothers and sisters-in-law, Alvin and Lynne Bolan of Temple, Eric and Terri Bolan of Paulding County, and Dudley Bolan of Waco; grandchildren, Layla Weathers, Jayden Weathers, Xander Weathers, Cason Weathers, Cruz Demoisey, Baizlee Thompson, and Brooke Thompson; several nieces and nephews also survive. The family will receive friends at Jones-Wynn Funeral Home in Douglasville, Monday, June 27, 2016 from 12:00 PM until 2:00 PM. Funeral Services will be conducted Monday, June 27, 2016 at 2:00 PM at the Chapel of Jones-Wynn Funeral Home in Douglasville. Interment will follow at Meadowbrook Memory Gardens in Villa Rica. Messages of condolence to the family may be sent at www.jones-wynn.com. Jones-Wynn Funeral Home & Crematory of Douglasville is in charge of arrangements. 770-942-2311

Honor the life of Ellen Grover

Please share a condolence, photo or memory of Ellen. We welcome all condolences that are positive and uplifting that will help family and friends heal.