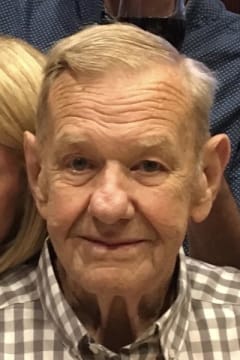 Mr. Edward “Ed” William Carr, Sr., age 83, of Douglasville, Georgia passed away Sunday, July 26, 2020. He was born January 8, 1937 in Watervliet, New York, the son of the late Mr. Fred Loren Carr, Sr. and the late Mrs. Louise Williams Carr. Mr. Carr served in the United States National Guard. He worked as a manager for and retired from Arrow Shirt Company after 42 years of service. Mr. Carr loved playing computer games and enjoyed gardening, yardwork and doing carpentry.
In addition to his parents, he is preceded in death by his brothers, Robert Carr, Warren Carr and Walter Carr; and his sisters, Doris Wheellock and Ester Henning.
Mr. Carr is survived by his wife of over 62 years, Carol Sleasman Carr of Douglasville; his daughter and son-in-law, Lynn and Preston Walker of Blairsville; his son and his partner, Edward William Carr, Jr. and Sean Antonetti of Atlanta; his sisters-in-law, Dolores Anderson of Albany, New York and Janice Golub of Arizona; his brother, Fred Carr, Jr. of New York; four grandchildren, Lauren Jones of Atlanta, Brooke Jones of Atlanta, Colin and Sarah Jones of Seattle, Washington and Taylor Jones of Atlanta; and many nieces and nephews.
According to Mr. Carr’s wishes, he will be cremated. No services are planned at this time. The family will celebrate his life privately at a later date.
In lieu of flowers the family has asked that donations be made to The American Humane Society or ASPCA.
Messages of condolence may be sent to the family at www.jones-wynn.com. Jones-Wynn Funeral Home of Douglasville is in charge of the arrangements. 770-942-2311.

Please share a condolence, photo or memory of Edward. We welcome all condolences that are positive and uplifting that will help family and friends heal.