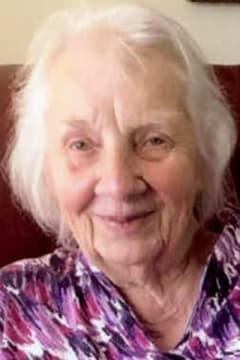 Mrs. Doris Marie Beler Earl, age 95, of Villa Rica, Georgia passed away Friday, May 8, 2020. She was born April 11, 1925, in Pittsburgh, Pennsylvania, the daughter of the late Gustav Adolph Beler and the late Marie Rose Zeck. She was a homemaker who loved her family and was devoted to her grandchildren and was considered as a grandmother who knew how to have fun. She was loyal and strong with lots of fight for herself and her family. She was especially fond of donuts. Mrs. Earl was of the Christian faith.
In addition to her parents, Mrs. Earl was preceded in death by her husband, Charles “Chuck” Earl; her son-in-law, Jim White and sister-in-law, Helen Zimmerman.
Mrs. Earl is survived by her daughter and son-in-law, Nancy and Lee White of Villa Rica; her son and daughter-in-law, Dr. Dennis Earl and Dr. Patty Earl of Knoxville, Tennessee; her grandchildren, Greg and Melissa White, David and Kim White, Chrissy and Wheeler Fleming and Lucas Earl; great grandchildren, Easton White, Kaylen White, Ian White, Nolan White and Kaley Parker; sister-in-law, Patricia Bagwell of Hendersonville, Tennessee; several nieces and nephews also survive.
We are still providing services to our families based on CDC COVID-19 guidelines. Private graveside services will be conducted and celebration of life gathering will be announced and held at a later date.
In lieu of flowers, those desiring to do so, may make donations In Memory of Doris Earl to Summit Church, PO Box 74034, Newnan GA 30271 or summitchurch.com.
Messages of condolence may be sent to the family at www.jones-wynn.com. Jones-Wynn Funeral Home of Douglasville is in charge of the arrangements. 770-942-2311.

Nancy and Dennis and families. Sorry to learn about Doris. Our thoughts and prayers are with you. God bless. David Zech, Ellen Koenig and families.
– David Zech
Nancy and family – Doris was a wonderful godly woman… I have such good memories of her….. We are praying for all of you….She will be greatly missed – but she certainly leaves a legacy in her family……Love you all so much – Donna Swecker
– Donna Swecker