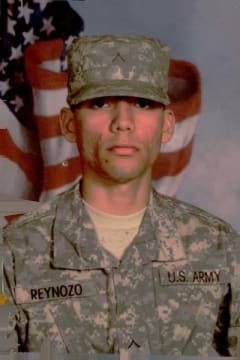 Mr. Donato Reynozo, Jr., age 30, of Panama City Beach, Florida, passed away Monday, August 17, 2020. He was born in July 1, 1990, in Brazos County, Texas, the son of Donato Reynozo Cruz and Antonia Reynozo. Mr. Reynozo was a veteran of the United States Army. He worked as a project manager for Classic Floors. Mr. Reynozo was a member of St. Theresa of the Child Jesus Catholic Church in Douglasville, Georgia.

Mr. Reynozo is survived by his father and mother, Donato Reynozo Cruz and Antonia Reynozo of Temple; his sister and brother-in-law, Marisela Reynozo and Marco Ruiz of Temple; his brothers and sisters-in-law, Jesus and Erika Reynozo of Pensacola, Florida, Daniel and Jackie Reynozo of Temple and David Reynozo of Temple; his niece, Elsie and his nephews, Andrew and Adriel.
The family will be conducting private mass services and he will be buried in Meadowbrook Memory Gardens in Villa Rica, Georgia.
Messages of condolence may be sent to the family at www.jones-wynn.com. Jones-Wynn Funeral Home of Villa Rica is in charge of the arrangements. 770-459-3694