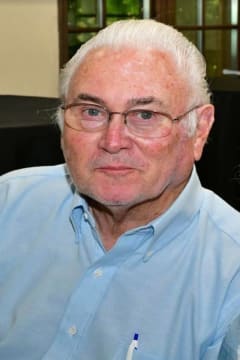 Donald O. Howard “Buddy” age 84, passed away on April 10, 2022. He was born on December 15, 1937. He is the son of the late Royce Odell Howard and the late Lula Mae Taylor Howard.
He was a hardworking man who adored his family. He approached life with a common sense mentality. Before his retirement, he worked as a computer analyst. He was a veteran of the United States Air Force.
In addition to his parents, he is preceded in death by his sister, Julia Dunton. He is survived by his loving wife Sherry Jean Robinette Howard; daughter, Donna and Mark Turner of Douglasville; son, David Howard of Villa Rica; sister, Carolyn and John McDaniel of Friendship, Tennessee; five grandchildren, Destin, Avery, Garrett, Benjamin and Titus; two great grandchildren Natalie and Nolan; several nieces and nephews also survive.
According to Mr. Howard’s wishes, he was cremated. A celebration of life will take place at a later date.
Messages of condolence may be sent to www.jones-wynn.com Jones-Wynn Funeral Home, Inc., and Cremation Services of Villa Rica is in charge of the arrangements. 770-459-3694