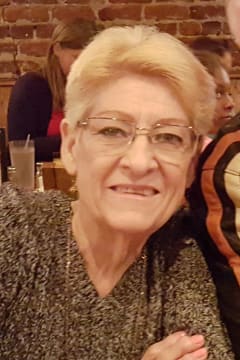 Mrs. Barbara Delores Jane Dacus, age 75 of Douglasville, Georgia passed away Sunday, April 25, 2021. She was born April 18, 1946 in Central City, Kentucky, the daughter of the late Mr. Willie Beasley and the late Mrs. Charity Mary Vincent. Mrs. Dacus enjoyed traveling, riding motorcycles, doing word search puzzles and was a very talented artist.
In addition to her parents, she is preceded in death by brothers, Carl Beasley, Charlie Beasley, Bill Beasley; sister, Ann Jones.
Mrs. Dacus is survived by her husband of 58 years, Mr. Hugh Thomas Dacus of Douglasville, Georgia; daughter and son-in-law, Rene and Robert Green of Frisco, Texas; son and daughter-in-law, David Scott and Donita Dacus of Douglasville, Georgia; sister, Joyce Dyer of Lapeer, Michigan; brothers and sisters-in-laws, Lou and Jean Beasley of Minneapolis, George and Lureen Beasley of West Point, Indiana; four grandchildren, Jessica Santana of Dallas, Texas, Kerrie Landino of Austell, Georgia, Kristen Westbrooks of Fayetteville, Georgia, Stefani and Travis Patterson of Douglasville, Georgia; two great grandchildren, Ava Westbrooks and T.J. Patterson; many nieces and nephews also survive.
According to Mrs. Dacus wishes, she will be cremated. A Memorial Service will be held at a later date.
Messages of condolence will be sent to the family at www.jones-wynn.com. Jones-Wynn Funeral Home & Crematory of Douglasville is in charge of the arrangements. 770-942-2311

RIP Aunt Barbara, I always loved you and looked up to you. I remember the day Aunt Barbara and Uncle Tommy got Married right at Grandma and Grandpa Beasley’s Apartment in Chicago. God bless this Family. Think only of the good memories and happy times. Love to All.
– Peter and Catrina Yaksic

Tommy, I am so sorry to read this about Barbara. I know what you are going through. It is one thing to lose your spouse but you will miss her most at times when you least expect it. For me it is early morning when we had our coffee and just talked! God bless you. I will be praying for you and you family. Love you!
– Emily Vincent Hinson

Beautiful Aunt Barb, you have always been one “cool” Auntie! What a wonderful sense of humor you showed to all your nieces and nephews. We loved hanging around you just to see what you would tease us about! I will miss you and keep you in my heart. I know Dad will be so happy to see you. Fly my Angel, Theresa Beasley Haynes
– Theresa Haynes

Tommy my heart breaks for you and your family. “I’m so sorry I never got to meet your wife. Praying for peace and comfort for you and family . Take care my longtime friend.
– Avery & Sharon King
Dear Tom,Rene, and Scott..so very sorry for your loss. Sending hugs and prayers as you move through this difficult time. She was a wonderful wife and mother. Love ❤️
– Carolee Hickey