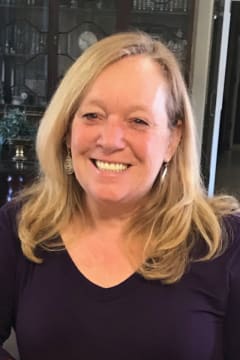 Ms. Christine Steenrod DeBorde, age 59, of Temple, Georgia, passed away Friday, April 30, 2021. She was born September 28, 1961 in Atlanta, Georgia, the daughter of the late Paul Clark Steenrod and Mrs. Dorothy Ann Ennis Stevens. Ms. DeBorde was a 1979 graduate of Douglas County High School and went on to graduate third in her class with honors from DeVry as an electronic technician. She worked for over 10 years as an activities coordinator for Valley Rescue Mission, formerly known as Damascus Women’s and Children’s Shelter. Ms. DeBorde loved helping people at the shelter and sharing her faith. She touched many lives and a holiday, March 30th, has been named in her honor in Columbus, Georgia for all of her community work at the Shelter. She enjoyed playing with and creating arts and crafts with her grandchildren. Ms. DeBorde was known as “Memaw” by everyone.

In addition to her father, Ms. DeBorde was preceded in death by her daughter, Alicia Denise McEntyre.

She is survived by her daughters and son-in-law, Aimee and David King of Temple and Stacy McEntyre of Fruithurst, Alabama; her son and daughter-in-law, Waide and Brittany McEntyre of Blairsville; her mother and step father, Dorothy and Bill Stevens; her sisters and brother-in-law, Angie McCurdy of Acworth and Laura and Mike Mabe of Villa Rica; brother and sister-in-law, Paul Joseph “Joe” and Karen Steenrod of Douglasville; numerous grandchildren, nieces, nephews and many friends also survive.

In accordance with Ms. DeBorde’s wishes, she will be cremated. In lieu of flowers, those desiring to do so, may make donations In Memory of Christine DeBorde to Valley Rescue Mission, 1200 11th Avenue, Columbus, GA 31901.

Christine was a light to so many and will be greatly missed. Prayers to all her family.
– Michelle Cobb
She was loved by many and taught many the meaning of redemption. After meeting her I truly in Christ we are a new creature.
– Latoya Johnson

Such a caring and loving soul. She will forever be missed. My condolences to family and friends. 🙏🏼
– ~Sheri Jones

Christine you were the best kind of woman in this world. Your beautiful, compassionate spirit will always be remembered. Rest in everlasting Peace. Love Tanya & Luther Rutledge
– Tanya
I have many fond memories of Christine. Having grown up as neighbors I spent quite a bit of time with them. Please know that you are all in my thoughts and prayers. With love and prayers, Tempie Bowling
– Tempie Bowling

Such a sweet beautiful soul! She will be greatly missed! We love you MeeMaw ❤️
– Crystal Harris