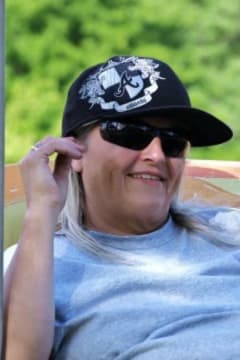 Ms. Cathy Gayle Campbell Guinn, age 60, of Temple, Georgia, passed away Sunday, March 21, 2021. She was born October 24, 1960, the daughter of the late Mr. Arthur Benjamin Campbell and the late Mrs. Flossie Kuykendahl Campbell. She worked as a nursing assistant at Garden Terrace. She loved the beach and animals. Ms. Guinn loved her mother and her grand-kids.

In addition to her parents, Ms. Guinn was preceded in death by her sister, Mildred Campbell.

She is survived by her daughter, Christa Brown of Waco, Georgia; her sons and daughter-in-law, William and Jennifer Guinn of Douglasville and Richard Guinn of Villa Rica; her sisters, Ann Tidwell of Whitesburg and Dorothy Wilson of Bremen; her brothers, Roger Campbell and Charles Campbell, both of Bremen; eight grandchildren; one great grandchild; her special friend, Ruth Watson of Temple; and a number of nephews and nieces also survive.

In accordance with Ms. Guinn’s wishes, she will be cremated. No services are planned at this time.

I just wanted to send my condolences to William, Richard, and Christa. Our Prayers are with you all. I am so sorry to hear your Mom passed away. I am here for y’all if y’all need me. I loved your Mom. May You Rest In Peace Sis. Love y’all Aunt Ann
– Annie Tidwell

R.i.p. sweet cathy you will surely be missed
– Susan jones

I’m so sorry to hear this my heart is breaking prayers for the family god bless
– Susan jones
We sure hate this I loved your Mom I love you all.our prayers are with you all. Love Aunt Dottie
– Dorothy Wilson