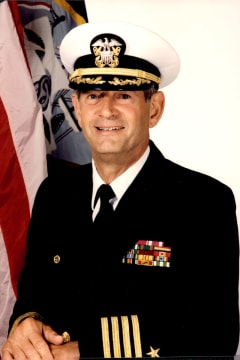 Captain Bruce Leon Hawk (USN, Retired), age 81, of Villa Rica, Georgia passed away Wednesday, April 20, 2022, at the Georgia War Veterans Home in Milledgeville, Georgia.
Captain Hawk was born in Laporte, Indiana on December 11, 1940, to Harold Milan Hawk and Helen Viola (Fellows) Hawk.
He was preceded in death by his parents and his first wife Carolyn Jean (Herreman) Hawk. Surviving is his wife Barbara Jean (Camp) Hawk, daughters Sheryl Hawk, and Susan (Geoff) Crosby, sons Stephen (Susan) Hawk and Stan Hawk, and three grandchildren, his sister Berta Zilles and brother Barry (Brenda) Hawk. He is also survived by stepchildren Tami Gibson, Ginger Gibson, and David (Melodee) Gibson, along with 3 step grandchildren. Bruce, with his parents and sister, moved to Fremont, OH from Indiana. During the summer Bruce worked with his father, a renowned cabinet maker, helping to build and install cabinets in homes and businesses across Northwest Ohio. He continued with this as a hobby throughout his life. He was active in Boy Scouts, achieving the rank of an Eagle Scout. He also enjoyed hunting, fishing, and camping.
In 1958 he graduated from Fremont Ross High School. He received an Associate of Arts Degree from West Hills College, Coalinga, CA in 1970. He graduated from California State University at Fresno with a Bachelor of Arts Degree in Computer systems Management in May of 1980.
Bruce began his lifelong career in the United States Navy when he enlisted in November of 1958. He started as an Aviation Electronics Technician, serving in every enlisted rank. In August 1969, he was promoted to Warrant Officer in the Aviation Electronics Technical specialty. In 1982 he was promoted and received a permanent Commission as a Lieutenant Commander, Aerospace Engineering Duty Officer (Aviation Maintenance).
Captain Hawk served in several positions and places including several cruises in Vietnam, the Mediterranean Sea, and the Persian Gulf. Some of the many positions include Avionics Officer for CVW-9 Air Wing, Officer in charge of Naval Aviation Engineering Service Unit Detachment at Point Mugu, CA, Maintenance Control Officer for VA-146, Aircraft Intermediate Maintenance Department Production Control Officer at NAS Cubi Point, Aviation Limited Duty Officer and Chief Warrant Officer Detailer, Maintenance Officer for CVW-9 Air Wing, Aircraft Intermediate Maintenance Officer at NAS Cubi Point, Executive/Commanding Officer of the Naval Aviation Engineering Service Unit in Philadelphia, PA.
Captain Hawk completed the Program Management course at the Defense Systems Management Command where he served as the Director of the Program Planning and Analysis Division through April 1994, then as the Executive Director for Logistics until November 1995. He then reported to Naval Air Maintenance Training Group in Pensacola, FL as the Executive Officer and became the Commanding Officer in May of 1997, retiring as a Captain from that position on August 1, 1999. Captain Hawk, during his distinguished Naval Career spanning over 40 years, received twenty-four awards while serving his country. These awards include the Legion of Merit, Meritorious Service Medal, Navy/Marine Corps Commendation Medal, Navy/Marine Corps Achievement Medal, Good Conduct Medal (two awards), National Defense Service Medal (two Awards), Armed Forces Expeditionary Medal, Sea Service Deployment Ribbon, Overseas Service Ribbon, Vietnam Service Medal, and the Republic of Vietnam campaign Ribbon.
After retiring Captain Hawk remained in the Pensacola area for several years prior to moving to Villa Rica with his wife Barbara. While in Florida he enjoyed boating in their cabin cruiser on the Gulf and Intercoastal Waterways. He also enjoyed watching the Blue Angels perform their shows and practice at their home base in Pensacola and knew many of the pilots by name.

Captain Hawk never lost his sense of humor and always had a smile for everyone he met. He was an avid runner and racquetball player and enjoyed taking evening walks with his wife and pets. He was a member of the American Legion Post 338, the Military Officers Association of America, the Mustangs, and Villa Rica First United Methodist Church.
Memorial Services will be held Wednesday, April 27, 2022 at 2:00 PM at Jones-Wynn Funeral Home and Crematory Douglas Chapel with Full Military Honors. The family will receive friends from 1:00 PM until 2:00 PM prior to the memorial service.
Messages of condolence should be sent to the family at www.jones-wynn.com. Jones-Wynn Funeral Home and Crematory Douglas Chapel is overseeing arrangements. His wife requests that any Memorials should be given in his name to the Fairfield Plantation American Legion Post 338, POA Office 265 Fairfield Road, Villa Rica, GA. 30180, (770-832-2360).