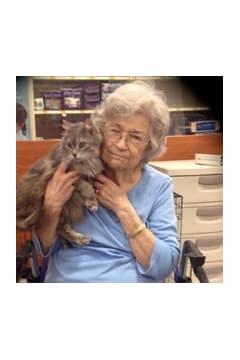 Allene Burnette Rowland, age 79, of Carrollton, passed away, Tuesday, July 21, 2015. She was born September 4, 1935 in Madisonville, TN the daughter of the late Mr. John Arthur Burnette and the late Mrs. Ina Mae Gates Burnette. She retired from Coca Cola Bottling Company in Atlanta. Mrs. Rowland loved making flowers for the pulpit at church, as well as graveside decorations, crafts and working for Meals on Wheels. She loved spending time with all of her family and friends, especially her children, grandchildren, great-grandchildren and pets. In addition to her parents, she was preceded in death by her husband, Ray Boyce Rowland. She is survived by her son and daughter-in-law, Boyce and Cheryl Rowland of Dallas; daughters and sons-in-law, Beverly and Jeff Sapp of Carrollton, Bonita Ray of Villa Rica; Beteana and Jonathan Rowland of Lavonia; grandchildren, Jeremy and April Rowland, Jason Sapp, Justin Rowland, Joseph and Lauren Sapp, Andrew Gooden, David Ray, Samantha Ray, Daniel Ray, Sloan Rowland, and Alex Rowland; great-grandchildren, Jada Sapp, Nate and Kate Rowland. The family will receive friends at Jones-Wynn Funeral Home in Villa Rica, Thursday, July 23, 2015 from 6:00 PM until 8:00 PM and Friday, July 24, 2015 from 11:00 AM until Funeral at 1:00 PM. Services will be conducted Friday, July 24, 2015 at 1:00 Pm from the Chapel of Jones-Wynn Funeral Home with Rev. Toby Cribbs officiating. Entombment will follow in Meadowbrook Memory Gardens Chapel Mausoleum. Messages of condolence may be sent to the family at www.jones-wynn.com. Jones-Wynn Funeral Home, Inc. and Cremation Services in charge of arrangements.

Honor the life of Allene Rowland

Please share a condolence, photo or memory of Allene. We welcome all condolences that are positive and uplifting that will help family and friends heal.