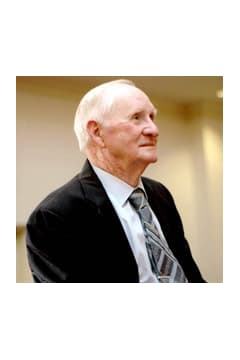 Mr. William Howell âBillâ Sinyard, 90, of Lithia Springs, Georgia passed away Monday, April 10, 2017. He was born October 8, 1926 in Fulton County the son of the late Mr. William Noah Sinyard and the late Mrs. Laura Ethel Turner Sinyard. He was married for 66 years to Johnnie Ruth Harding Sinyard. He was a veteran of World War II. He worked and retired from Westinghouse Electric Corp. in Atlanta after 40 years. Bill loved golf, he was one of the original charter members of the West Pines Golf Club. He also served as a 60-year member at the Masonic Lodge #12 in Austell. In addition to his parents, he was preceded in death by his brothers, Ray, Jim, Robert and Frank Sinyard; sisters, Judy Sorrells, Audie Teal and Louise Bennett. He is survived by his wife, Johnnie Ruth Harding Sinyard of Lithia Springs; his four children and their spouses, Alex and Marlene Sinyard of Brunswick, Maine, Debbie and Ronald Bivins of Roanoke, Alabama, Gail and Mike Dennis of Douglasville, Georgia, and Philip and Michelle Sinyard of Douglasville, Georgia; his sister and brother-in-law, Pat and Raford Vaughn of Powder Springs; brother and sister-in-law, Jack and Jenny Sinyard of Powder Springs; sisters-in-law, Joyce Sinyard and Alice Sinyard; eight grandchildren; six great-grandchildren; numerous nieces and nephews. The family will receive friends at Jones-Wynn Funeral Home in Douglasville, Thursday, April 13, 2017 from 11:00 AM until 1:00 PM. Funeral Services will be conducted Thursday, April 13, 2017 at 1:00 PM at the Chapel of Jones-Wynn Funeral Home in Douglasville with Rev. Mike Sinyard and Dr. Marion Beaver officiating. Interment will follow at Sunrise Memorial Gardens in Douglasville. Flowers accepted, or those desiring to do so may make contributions in lieu of flowers to Wellstar Tranquility Hospice, 4040 Hospital West Drive, Austell, GA 30106. Messages of condolence to the family may be sent at www.jones-wynn.com. Jones-Wynn Funeral Home and Crematory of Douglasville is in charge of arrangements. 770-942-2311

Honor the life of William Sinyard