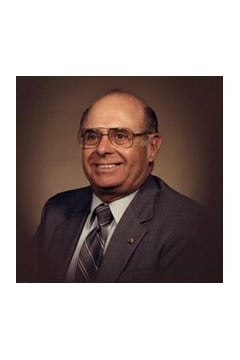 Mr. William Blaine Prickett, age 94, passed away Monday, January 29, 2018. He was born February 19, 1923 in Douglas County, the son of the late Mr. Walter Selman Prickett and the late Mrs. Vera Heaton Prickett. He was a member of the Douglas County High School Class of 1940. He served in 815th Squadron 483rd Bombardment Group of the United States Army Air Forces during World War II. He served in the Normandy Campaign, Southern France Campaign, Northern France Campaign, in air combat in the Balkans Campaign, Rome-Arno Campaign, Northern Apennines Campaign, Po Valley Campaign and the Rhineland Campaign. He was awarded the Distinguished Unit Badge with 1 Bronze Oak Leaf Cluster, American Service Medal, Good Conduct Medal, World War II Victory Medal, and the European African Middle Eastern Service Medal with three Bronze and one Silver Star. After World War II, he returned to Georgia, and began working at Southern Railway until he retired. He also was a Builder. His hobbies included bird hunting and fishing, and he was especially fond of his birddogs. After retirement, he enjoyed traveling all over the United States to World War II Conventions and reconnecting with fellow members of âThe Greatest Generationâ. It was a great joy to him to reunite with his World War II buddies. He was the oldest member of the American Legion in Douglasville. He was a member of Sweetwater Baptist Church and active in his Sunday School Class. In addition to his parents, he was preceded in death by his wife, Dorothy Gray Green Prickett; and sister, Claudia Ruth Weathington. He is survived by a niece, Judy Deal of Douglasville; special friends, Caroline and Jerry Moon of Douglasville; several great-nieces and great-nephews. A special thank you to Blaineâs caregiver, CNA and dear friend, Lori Leimbach and the staff of Kindred Hospice in Douglasville for their support and care. The family will receive friends at Jones-Wynn Funeral Home in Douglasville, Wednesday, January 31, 2018 from 12:00 PM until 2:00 PM. Funeral Services will be conducted Wednesday, January 31, 2018 at 2:00 PM at the Chapel of Jones-Wynn Funeral Home in Douglasville with his dear friend, Rev. Bryan Alexander officiating. Following the funeral service, the Committal Service will be in the Chapel in honor of his dedicated service to his country. Military Honors will be provided by members of the U.S. Army Honor Guard. Interment will follow at Sunrise Memorial Gardens. Messages of condolence to the family may be sent at www.jones-wynn.com. Jones-Wynn Funeral Home & Crematory of Douglasville is in charge of arrangements. 770-942-2311

Please share a condolence, photo or memory of William Blaine. We welcome all condolences that are positive and uplifting that will help family and friends heal.