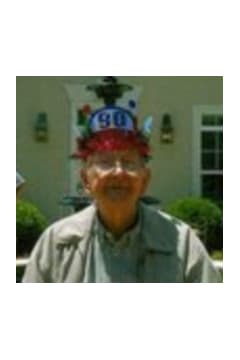 Mr. Wayman Joe Wallace, Sr., age 90, of Douglasville, Georgia passed away Thursday, November 21, 2013 at Benton House following an extended illness. He was born May 25, 1923 in Roopville, Georgia the son of the late Mr. Alvin Wallace and the late Mrs. Bessie Teal Wallace. He served in the United States Army during World War II. He retired from Yellow Freight. He was a member of First Baptist Church of Douglasville. Mr. Wallace was a devoted family man, and a loving husband, father, and grandfather. In addition to his parents, he was preceded in death by his beloved wife, Josephine B. Wallace; five sisters and three brothers. He is survived by two daughters and sons-in-law, Peggy and Jimmy Davis of Newnan and Joy and Lance Cole of Bremen; five sons and daughters-in-law, Wayman Joe Wallace, Jr., Larry and Mary Ann Wallace of Douglasville, Kirby and Gail Wallace of Tyrone, Steve and Starry Wallace of Winston, and Tim and Kim Wallace of Carrollton; 17 grandchildren; 29 great-grandchildren; 4 great-great grandchildren; several nieces and nephews. The family will receive friends at Jones-Wynn Funeral Home in Douglasville, Saturday, November 23, 2013 from 5:00 PM until 8:00 PM. Funeral Services will be conducted Sunday, November 24, 2013 at 2:00 PM at the Chapel of Jones-Wynn Funeral Home in Douglasville with Rev. Ikey Watson officiating. Interment will follow at Carrollton City Cemetery. The following will serve as pallbearers: Kenny Wallace, Roy Garner, Wiley Garner, Shannon Shockley, Jamie Wallace, Alan Wallace, Trevor Garner and James Davis, III. Messages of condolence may be sent to the family at www.jones-wynn.com. Jones-Wynn Funeral Home and Crematory, Inc. of Douglasville is in charge of arrangements. 770-942-2311

Honor the life of Wayman Wallace

Please share a condolence, photo or memory of Wayman. We welcome all condolences that are positive and uplifting that will help family and friends heal.