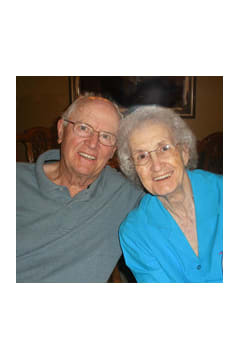 Mrs. Virgie Mae Howell Chandler, 89, of Douglasville, Georgia passed away Tuesday, June 20, 2017. She was born September 25, 1927 in Young Harris, Georgia, the daughter of the late Mr. William David Howell and the late Mrs. Amanda McClure Howell. In her youth, she worked at Mead Packaging where she met Ervin Henry Chandler, the love of her life. She later worked at the Richâs in Downtown Atlanta. She was a homemaker and spent her life taking care of her beloved family. She was a devoted and loving wife, mother, grandmother, and great-grandmother. She was a member of West Union Baptist Church in Young Harris, First Baptist Church Lithia Springs, and Davis Chapel Church in Mableton for many years. In addition to her parents, she was preceded in death by her husband of 66 years, Ervin Henry Chandler on March 12, 2017; her sisters, Cora Powell, Cordie Sampson, Christine Justice, and Irene Underwood; brothers, John Howell, Robert Howell and Herman Howell. She is survived by one son and daughter-in-law, Tony and Tammy Chandler of Douglasville; one daughter and son-in-law, Susan Jeanine and Ken Bragg of Douglasville; three grandchildren, Cullen Bragg, Amanda Chandler, and Kailey Bragg; one great-grandchild, Reagan Mae Bragg; several beloved nieces and nephews. The family will receive friends at Jones-Wynn Funeral Home in Douglasville, Thursday, June 22, 2017 from 6:00 PM until 8:00 PM. Funeral Services will be conducted Friday, June 23, 2017 at 1:00 PM at the Chapel of Jones-Wynn Funeral Home in Douglasville with Dr. Marion Beaver officiating. Cullen Bragg will provide the eulogy. Musical selections will be provided by Danny Howell. Interment will follow at Sunrise Memorial Gardens. Messages of condolence to the family may be sent at www.jones-wynn.com. Jones-Wynn Funeral Home & Crematory of Douglasville is in charge of arrangements. 770-942-2311

Back to Obituaries | Close WindowLeak & Sons Funeral Homes Virgie Lowe Passed 11/11/2019 Share SHARE A MEMORY SEND FLOWERS OBITUARY & SERVICES GUEST BOOK SEND FLOWERS My name is Virgie Blue .. I live in Centreville IL.. Jesus Christ, said that one day soon the dead will arise and we will see Ms. Chandler again .. John 5:28 … Jesus Christ all so gave us something to think about at John 11: 11, 24-26 … May the God of all comfort Jehovah God (Psalms 83:18) give you all peace and comfort during this most difficult time … 2 Corinthians 1:2-4 … If questions please visit your local Kingdom Hall .. or respond at vlblue4u@gmail.com…thank you so much for letting me share this encouragement and hope with the family ..Revelation 21: 4, 5
– Virgie L. Blue