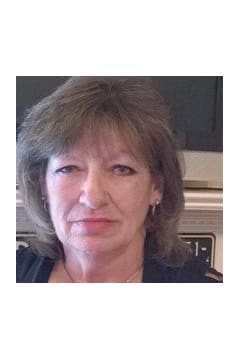 Mrs. Sherry Nadine Milam, age 63 of Carrollton, passed away Monday, February 4, 2019. She was born March 25, 1955, the daughter of the late Mr. Raymond LeRoy Russell and Mrs. Ruby Lelia Harrison. She loved her family and her dog, Diamond. In addition to her parents she is preceded in death by her husband, Robert Edward âBobbyâ Milam; and sister, Sandy Holland.She is survived by daughters and son-in-law, Dawn and Tom Riddle of Cartersville, Christy Milam of Carrollton; sisters and brothers-in-law, Glenda and Freddie Campbell of Douglasville, Jane and Robert Holland of Douglasville, Barbara and Ricky Rodgers of Douglasville; four grandchildren, Breanna, Megan, Sonny and Ruby; 2 great grandchildren, Cameron and Gavin; several nieces and nephews also survive. The family will receive friends at Jones-Wynn Funeral Home on Thursday, February 7, 2019 from 6:00 PM until 8:00 PM. Funeral services will be conducted on Friday, February 8, 2019 at 12:00 PM from the Chapel of Jones-Wynn Funeral Home Douglasville. Interment will follow at Bright Star Cemetery.Messages of condolences may be sent to the family at www.jones-wynn.com. Jones-Wynn Funeral Home Douglasville is in charge of the arrangements. 770-942-2311.

Honor the life of Sherry Milam

Please share a condolence, photo or memory of Sherry. We welcome all condolences that are positive and uplifting that will help family and friends heal.