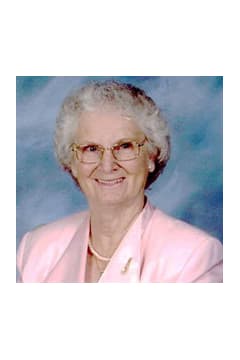 Mrs. Sara Blondella Marlow Pugh, 90, of Douglasville, Georgia passed away Friday, September 25, 2015. She was born August 5, 1925 in Gainesville, Georgia the daughter of the late Mr. Buford Bertis Marlow and the late Mrs. Della Mae White Marlow. She was a homemaker and a member of Ebenezer Baptist Church in Mableton. She enjoyed crocheting. In addition to her parents, she was preceded in death by her husband, Eugene Washington Pugh on June 8, 2003; sons, Jerry Pugh and Danny Pugh; sister, Clara Hightower; and brothers, Carlton Marlow and Bertis Marlow. She is survived by two daughters and a son-in-law, Glenda Queen of Douglasville and Sharon and Billy Hensley of Marietta; son, Ricky Pugh of Douglasville; three sisters and a brother-in-law, Agnes Stephens of Eatonton, Frances and Kenneth Lawrence of Ballground, and Sue French of Gainesville; four grandchildren, Shawn Pugh, Mark Pugh, Nicole Burchfield, and Joshua Pugh; several great-grandchildren; several nieces and nephews. The family will receive friends Tuesday, September 29, 2015 from 4:00 PM until 7:00 PM. Funeral Services will be conducted Wednesday, September 30, 2015 at 11:00 AM at the Chapel of Jones-Wynn Funeral Home in Douglasville with Pastor Billy Lord officiating. Interment will follow at Crest Lawn Memorial Park in Atlanta. Messages of condolence to the family may be sent at www.jones-wynn.com. Jones-Wynn Funeral Home & Crematory of Douglasville is in charge of arrangements. 770-942-2311

Honor the life of Sara Pugh