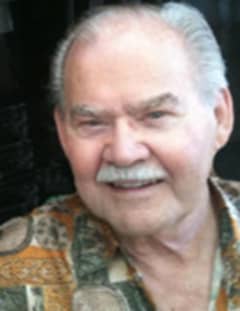 Mr. Russell âRussâ Gerald Sarner, age 93, of Villa Rica, passed away, Friday, June 29, 2018. He was born August 1, 1924 in Princeton, MN the son of the late Mr. Charles Sarner and the late Mrs. Emma Hoff Sarner. Mr. Sarner was very civic minded and involved with many organizations with his âgive backâ attitude. After serving in the U.S. Navy in the Pacific during WW2, he spent his career with Abbott Laboratories; he worked his way up from the stockroom to retirement as regional sales manager in hospital products, wearing many different hats along the way. Russ hired the first female representative to work for Abbott, and they remained friends for the rest of his life, as did all his team members. Together he and his âteamâ won many awards annually for their sales prowess.Early in his career, he served as President of the Minnesota Association of Retarded Children, and with the March of Dimes. He was a Charter member of the Kiwanis Club of Fairfield Plantation serving in every position on the Board. Mr. Sarner served as a Georgia District Lieutenant Governor, earning the title of Distinguished Lieutenant Governor, the only one in the Georgian District in the past several years. He worked on a Kiwanis project to eliminate IDD (Iodine Deficiency Disorders) raising over $100,000 for this Project. He served on the GreyStone Power Company Board of Directors and the University of West Georgia Foundation, Inc. Mr. Sarner and his wife, Mary established a Nursing School Scholarship at the University of West Georgia. He and Mary began CASA (Court Appointed Special Advocates) for Carroll County, still serving as Honorary Board Members. They are long time supporters of the Childrenâs Healthcare of Atlanta Foundation, The Carter Center, Doctors Without Borders, The Smile Train and education for American Indians, as well as many Medical Research projects. After retiring in 1985, he made his home on Lake Tara in Fairfield Plantation, built his house, loved working in his garden, doing home improvements, always being available to help neighbors and friends with projects and often seen riding his Jet Ski around the lake, also serving as Lake Patrol in his boat. His primary interests in life were his family and helping children. Everywhere they traveled around the world, âGrandpa Russâ ended up, usually sitting on the floor, surrounded by laughing children. He adopted Sand Hill Elementary School, spending many hours mentoring the children, teaching them âgood touch, bad touchâ lessons, acting as the Kiwanis Builders Club, Youth Group advisor, and providing funds to help with school expenses. He could be seen at the gates to Fairfield Plantation at Christmas every year, rain, sun, sleet or snow until 2016 collecting donations of food and cash to be distributed to the Carroll County Emergency Shelter, Salvation Army and Soup Kitchen. He was annually the top salesman of advertisements for the Kiwanis Telephone Directory (the Clubâs major fund raiser for projects aimed at helping children). There was not a single Kiwanis project that he did not get behind and work full strength to make successful. For several years, he hosted fund-raising âA Dayâ parties for the University of West Georgia scholarships. He and Mary were truly honored to receive the âService to Mankindâ Award from the area Sertoma Clubs.In addition to his parents, he was preceded in death by his daughter, Wendy Sarner; brother, Ronald Sarner and sisters, Ardis Sarner Lind and Muriel Sarner; step great-grandson, Jacob Gristick. step-son, Darrell Dehon; step-daughter, Lisa Dehon; and his ex-wife, June C. Sholin. He is survived by his wife of 34 years, Mary Acland Sarner of Villa Rica; son and daughter-in-law, Steven and Marjorie Sarner of Boquete, Panama; daughters and sons-in-law, Lee Ann and Shannon Wharton of Marietta, Tracy and Randy Fritchman of Dallas; step-daughter, Lauré Dehon of Brevard, NC; step-son, Kenneth Dehon of Ft. Myers, FL.; brother, Charles Sarner; grandchildren, Mark Andrew Hunter, Bekah (Kyle) Smithy, Zachary Sarner, Colin Sarner, Amanda Church, Shannon Croyts; step-grandchildren, Jon Miller, Erin (Scott) Wilson, Micayla (Dan) Burroughs, Kendall Dehon, Kelly Dehon, Darren Pollard, William Gristick, Ashley Johnson, Devin Gristick; step-grandson, John Fritchman; great-grandchildren, Jeanette Goodlin, Gavin Brown, Aiden Brown, Leo Gueikan, Taylor Croyts; step-great-grandsons, Dylan Gristick, Gerald Gristick and Westley Wilson; step-great grandson, Jonathan Fritchman. Several nieces and nephews also survive. He loved and is dearly loved and treasured by all his extended family members.Gathering of friends will be held Saturday, July 14, 2018 from 1:00 PM until 2:00 PM at Jones-Wynn Funeral Home. Celebration of Life will be conducted Saturday, July 14, 2018 at 2:00 PM from the Chapel of Jones-Wynn Funeral Home with Dr. Kyle Marrero, Dr. Sam Newman, and Mr. Steve Beck. Musical selection will be provided by Dr. Jane Marrero. A reception will follow the celebration of life. Messages of condolence may be sent to the family at www.jones-wynn.com. Jones-Wynn Funeral Home, Inc. and Cremation Service of Villa Rica in charge of arrangements. 770-459-3694Those desiring to do so may make contributions to the Carroll County CASA, 110 Dixie Street, Suite 100, Carrollton, GA 30117 or the Kiwanis International fund for the Elimination of Neonatal Tetanus, Post Office Box 6457-Departement 286, Indianapolis, IN 46206.

Honor the life of Russell Sarner

Please share a condolence, photo or memory of Russell. We welcome all condolences that are positive and uplifting that will help family and friends heal.