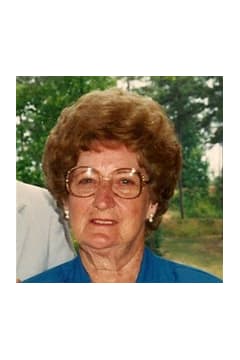 Mrs. Ruby Mae Self Gilstrap, 95, of Douglasville, Georgia passed away Friday, June 20, 2014. She was born December 22, 1918 in Forsyth County, Georgia the daughter of the late Mr. Thomas Benson Self and the late Mrs. Sara Davis Self. She married Hubert Dixon Gilstrap on September 10, 1938 in Marietta. She was of the Baptist Faith. In addition to her parents, she was preceded in death by her husband, Hubert Dixon Gilstrap on October 8, 2010; children, Donald Dixon Gilstrap, Michael Gilstrap, and Kathryn Mae Stanley; brothers, Earl Self, Virgil Self, Paul Self and Otis Walter Self. She is survived by three daughters and sons-in-law, Carol and Alton Fincher, Ann and Harold LaTulippe, and Joyce and Dennis Stanley all of Douglasville; sister, Mary Mullenix; eighteen grandchildren; numerous great-grandchildren and great-great grandchildren; several nieces and nephews. The family will receive friends at Jones-Wynn Funeral Home in Douglasville, Saturday, June 20, 2014 from 3:00 PM until 6:00 PM. Funeral Services will be conducted Sunday, June 21, 2014 at 2:00 PM at the Chapel of Jones-Wynn Funeral Home in Douglasville with Rev. Mike Young officiating. Interment will follow at Crest Lawn Memorial Park in Atlanta. Messages of condolence to the family may be sent at www.jones-wynn.com. Jones-Wynn Funeral Home & Crematory of Douglasville is in charge of arrangements. 770-942-2311

Please share a condolence, photo or memory of Ruby Mae. We welcome all condolences that are positive and uplifting that will help family and friends heal.