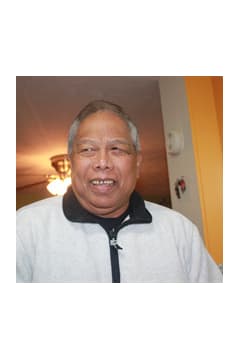 Mr. Remigio Cabalo Bergantinos, 74, of Douglasville, Georgia passed away Sunday, April 27, 2014. He was born December 16, 1939 in Rosales, Philippines the son of the late Mr. Emilio Bergantinos and the late Mrs. Concepcion Cabalo Bergantinos. He married Adelaida Corpuz on March 2, 1959 in the Philippines. He was a member of St. John Vianney Catholic Church and worked in the textile industry at Southeast Yarn. In addition to his parents, he was preceded in death by his sisters, Aniceta Yu and Araceli Lagunte; and brothers, Emilio Bergantinos, Jr. and Raymundo Bergantinos. He is survived by his wife of 55 years, Adelaida Corpuz Bergantinos of Douglasville; one daughter and her fiancé, Nenita Morillo and Rod Dabela of Douglasville; three sons and daughters-in-law, Julio and Amalia Bergantinos, Arturo and Mylene Bergantinos, and Roberto and Maria Rosa Bergantinos all of Douglasville; sisters, Avelina, Angelita, Anaceta, Arsenia, and Anabelle; brothers, Conrado, Fernando, Renato, and Eduardo; grandchildren, April Joy, Glenda, Kennex Lee, Billy Ray, Clark Lois, Kim Andre, Sheena Rose, Patricia Marie, and Terence Matthew; great-grandchildren, Elayna, Mario, Jayden, Sophia, and Andrea; several nieces and nephews also survive. The family will receive friends at Jones-Wynn Funeral Home in Douglasville, Friday, May 2, 2014 from 5:00 PM until 9:00 PM and Saturday, May 3, 2014 from 2:00 PM until 9:00 PM. Services will be conducted Sunday at 2:00 PM from the chapel of Jones-Wynn Funeral Home. Interment will follow at Mozley Memorial Gardens in Lithia Springs. Messages of condolence to the family may be sent at www.jones-wynn.com. Jones-Wynn Funeral Home & Crematory of Douglasville is in charge of arrangements. 770-942-2311

Honor the life of Remigio Bergantinos

Please share a condolence, photo or memory of Remigio. We welcome all condolences that are positive and uplifting that will help family and friends heal.