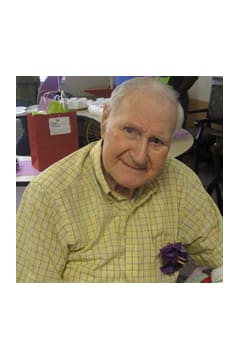 Ray Ivy Hannah, 94, went home to heaven on March 8, 2016, at the Senior Care Center in St. Marys, Georgia. He was born in Carroll County, Ga. and was a graduate of Roopville High School. He served in the US Armyâs 476th AAA BN during WWII in the Philippines, New Guinea, and Australia. In 1946 he married Mary Elizabeth Shierling who preceded him in death in 2008. Mr. Hannah lived in Bremen for almost 60 years and worked for Hubbard Pants Co. He was a long-time member of First Baptist Church Bremen where he sang in the choir and was a deacon. Later he was a member of Harmony Baptist Church at Bowdon Junction. He was known for his âgreen thumbâ and for sharing blueberries from his bushes.Mr. Hannah was preceded in death by his parents, George and Nora Howard Hannah, brothers Fred and Grover Hannah, and sisters Frances Ainscough, Helen Jackson, Hazel Yarbrough, and Betty Hood.Mr. Hannah is survived by his daughter Glenda (Ken) Kessler of Kingsland, GA and son Tim (Debbie) Hannah of Chattanooga, TN., grandchildren Karen Kessler Smith, Kyle Kessler, Kurt Kessler, Meredith Hannah, and five great- grandchildren. He is also survived by brothers Ed and Ariail Hannah, sisters Emmie Christopher and Geanie Mae Cooper and numerous nieces and nephews.Funeral services will be on Saturday, March 12 from the chapel of Jones-Wynn Funeral Home in Villa Rica with Dennis Hale and Kurt Kessler officiating. Visitation will be from 12:30-2:00. Burial will be in Meadowbrook Memory Gardens, Villa Rica with military honors.In lieu of flowers, gifts may be made to Gideons International, P.O. Box 1262 Kingsland, GA 31548 or to a local Gideon camp.Messages of condolence may be sent to the family at www.jones-wynn.com. Jones-Wynn Funeral Home, Inc. and Cremation Services of Villa Rica in charge of arrangements. 770-459-3694

Honor the life of Ray Hannah