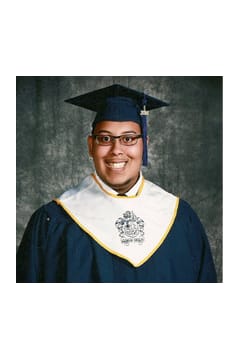 Quentin Alexander McGee, age 18, of Douglasville, Georgia passed away Monday, October 6, 2014. He was born October 16, 1995 in Phoenix, Arizona the son of Mr. James Edward McGee and Mrs. Audrey Brown McGee. He was a 2014 graduate of Douglas County High School. He worked as an IT Specialist for Douglas County Disabilities Coalition. He enjoyed robotics engineering, computer programming, and video games. He was an avid animal lover and enjoyed traveling to the North Georgia Mountains. He was preceded in death by his paternal grandparents, Donald L. McGee and Elsie M. McGee. He is survived by his mother, Audrey Brown McGee and father, James Edward McGee both of Douglasville; two sisters, Kenya McGee and Erika McGee both of Douglasville; maternal grandparents, Medicus Brown and Florence B. Harris; several aunts, uncles, cousins. The family will receive friends at Jones-Wynn Funeral Home in Douglasville, Friday, October 10, 2014 from 1:00 PM until 2:00 PM. Funeral Services will be conducted Friday, October 10, 2014 at 2:00 PM at the Chapel of Jones-Wynn Funeral Home in Douglasville. According to the familyâs wishes, the body will be cremated following the service. Messages of condolence to the family may be sent at www.jones-wynn.com. Jones-Wynn Funeral Home & Crematory of Douglasville is in charge of arrangements. 770-942-2311

Honor the life of Quentin McGee

Please share a condolence, photo or memory of Quentin. We welcome all condolences that are positive and uplifting that will help family and friends heal.