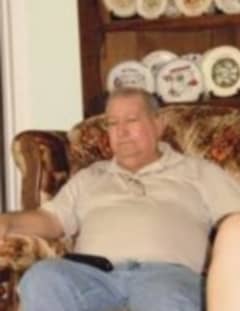 Mr. Paul Fletcher Cosby, 74, of Douglasville, Georgia passed away Thursday, December 19, 2013. A native of Douglas County, Georgia, he was born August 23, 1939 the son of the late Mr. Tommy Fletcher Cosby and the late Mrs. Lucy Cosby. He retired from Vulcan Materials in Villa Rica. One of his favorite pastimes was his woodworking hobby. In addition to his parents he was preceded in death by his five sisters and one brother. He is survived by his wife, Peggy Henderson Cosby of Douglasville; daughter and son-in-law, Teresa and Roger Wilhoite of Villa Rica; three sons and daughter-in-law, Jerry Dale and Beth Cosby of Douglasville, Paul Anthony Cosby of Villa Rica, and Gary Joe Cosby of Douglasville; two sisters, Ina Dourough of Villa Rica and Patricia Jordan of Bremen; eleven grandchildren; six great-grandchildren; several nieces and nephews. The family will receive friends at Jones-Wynn Funeral Home, Douglas Chapel, Friday, December 20, 2013 from 3:00 PM until 8:00 PM. Funeral Services will be conducted Saturday, December 21, 2013 at 3:00 PM from the Chapel of Jones-Wynn Funeral Home in Douglasville. Interment will follow at Rosehaven Cemetery. Messages of condolence may be sent to the family at www.jones-wynn.com. Jones-Wynn Funeral Home and Crematory, Inc. of Douglasville is in charge of arrangements. 770-942-2311

Honor the life of Paul Cosby