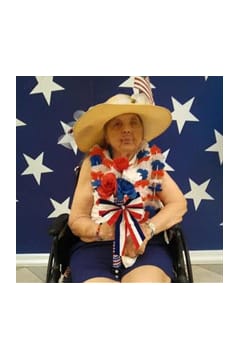 Nellie Mae Byrant Blish, age 90, of Carrollton, passed away, Sunday. November 1, 2015. She was born June 10, 1925 the daughter of the late Mr. William James Bryant and the late Mrs. Nora Gladys Anderson Bryant Daily. She was a resident of Oklahoma for over 55 years. In addition to her parents, she was preceded in death by her husband, Don Alman Bilsh; daughter, Lorraine Shaffer; son, William James Bryant; grandchild, Steven Cox. She is survived by her daughters and son-in-law, Irene Johnson of Ok, Patricia and Terry Bell of OK; sons, Paul Shaffer of Carrollton, Donald Bish, Jr. of OK; twenty four grandchildren and several great grandchildren. According to Mrs. Bilshâs wishes she was cremated. Messages of condolence may be sent to the family at www.jones-wynn.com. Jones-Wynn Funeral Home, Inc. and Cremation Services of Villa Rica in charge of arrangements. 770-459-3694

Honor the life of Nellie Blish

Please share a condolence, photo or memory of Nellie. We welcome all condolences that are positive and uplifting that will help family and friends heal.