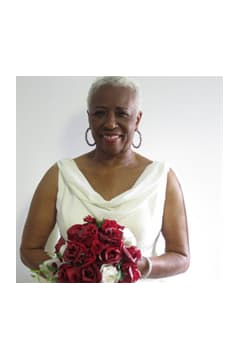 Mrs. Minnie Kelly Pope, 72, of Douglasville, Georgia passed away Sunday, April 20, 2014. She was born July 28, 1941 in Sylvania, Georgia the daughter of the late Mr. Roger Joseph Kelly and the late Mrs. Edith Mae Roberts Kelly. She worked as an office manager for many different physicians and she was most recently a caregiver. She was a devoted member of Cornerstone Baptist Church in Lithia Springs. She loved the Lord with all her heart, was very active in church and enjoyed serving in the Senior Citizen Ministry. She was a Proverbs 31 Woman who cherished being a wife and mother. In addition to her parents, she was preceded in death by her brother, Marvin Kelly. She is survived by her husband, David T. Pope of Douglasville; two daughters and one son-in-law, Penny Wright of Atlanta and Traci Wright Owens and her husband, Prince E. Owens III of Jonesboro; one son, Lawrence Smith and his fianceé, Jane Kim of New York City; three sisters Kathleen Kelly, Miramar, FL, Ernestine Pierce (spouse Roger), Atlanta, GA, and Carolyn Kelly, Hollywood, FL; two brothers, Claude Kelly, Austell, GA, and Tony Kelly (spouse Sandra), Union City, GA; one grandchild, Shameka Wright; numerous nieces and nephews. The family will receive friends at Jones-Wynn Funeral Home in Douglasville, Friday, April 25, 2014 from 6:00 PM until 8:00 PM. Funeral Services will be conducted Saturday, April 26, 2014 at 11:00 AM at Cornerstone Baptist Church in Lithia Springs with Pastor Benjamin Lang officiating. Mrs. Pope will lie in state at the church from 10:30 AM until 11:00 AM. Interment will follow at Sunrise Memorial Gardens. Messages of condolence to the family may be sent at www.jones-wynn.com. Jones-Wynn Funeral Home & Crematory of Douglasville is in charge of arrangements. 770-942-2311

Honor the life of Minnie Pope

Please share a condolence, photo or memory of Minnie. We welcome all condolences that are positive and uplifting that will help family and friends heal.