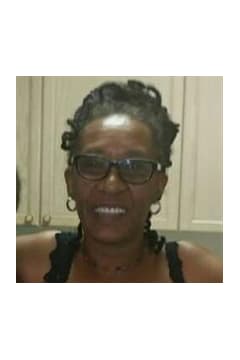 Mrs. Michelle Jackson Frasier, 58, of Lithia Springs, Georgia passed away Friday, March 3, 2017. She was born March 12, 1958 in Poughkeepsie, New York, the daughter of the late Mrs. Eleanor Vivian Scott Jackson and Mr. Abednego Emmanuel Jackson. She was a chef at Wellstar Cobb Hospital and owned her own catering business âShut Up and Eatâ. She enjoyed gardening, antiquing, and fishing. She enjoyed exercising and running marathons. Devoted to her family, she enjoyed taking care of their needs and decorating the home. She was an avid fan of âFamily Guyâ especially enjoying Brian and Stewie. In addition to her mother, she was preceded in death by a sister, Renee Nevarez and brother, Kevin Jackson. She is survived by her husband, Michael Frasier of Charleston, SC; one daughter and son-in-law, Aja and Terry Disher of Lithia Springs; three sons, Moses Frasier, Kwame Frasier, and Yishai Frasier all of Charleston, SC; her father, Abednego Emmanuel Jackson of Austell; stepmother, LaConia Jackson of Lithia Springs; sisters and brothers-in-law, Adrienne and Sam Jackson of Barstow, CA, Lisa and Gordon DeShazer of Powder Springs, GA, and Lana Jackson of Lithia Springs, GA; brother and sister-in-law, Nero and Alicia Wise of Lithia Springs, GA; grandchildren, Cheyenne Frasier, Oliveah Brown, Christian Frasier; and she helped raise 8 additional grandchildren; several aunts, uncles, cousins; and a host of nieces and nephews. The family will receive friends at Jones-Wynn Funeral Home in Douglasville, Saturday, March 11, 2017 from 10:00 AM until 11:00 AM. A Celebration of Life will be conducted Saturday, March 11, 2017 at 11:00 AM at the Chapel of Jones-Wynn Funeral Home in Douglasville. In accordance to her wishes, the body was cremated. Messages of condolence to the family may be sent at www.jones-wynn.com. Jones-Wynn Funeral Home & Crematory of Douglasville is in charge of arrangements. 770-942-2311

Honor the life of Michelle Frasier

Please share a condolence, photo or memory of Michelle. We welcome all condolences that are positive and uplifting that will help family and friends heal.