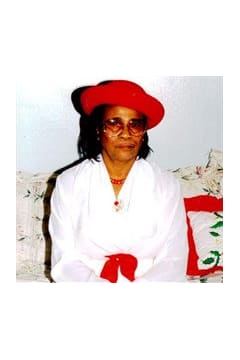 Ms. Marianne Pierre, age 85, of Lithia Springs, Georgia passed away, Monday, May 18, 2015. She was born May 9, 1930 in La Vallee, Jacmel, Haiti, the daughter of the late Mr. Charles Pierre and the late Mrs. Rose Payen Pierre. She worked as a homecare nurse for Braggs Homecare and she was of the Catholic Faith. In addition to her parents, she was preceded in death by sisters, Elizabeth Dure, Chrisianne Pierre, and Alianne Pierre. She is survived by her sister, Tilia Pierre Dure of Haiti; niece, Fernande Dure Jacinthe of Lithia Springs, GA; several nieces and nephews; and a host of additional family members also survive. The family will receive friends at Jones-Wynn Funeral Home in Douglasville, Friday, May 29, 2015 from 6:00 PM until 8:00 PM. Funeral Services will be conducted Saturday, May 30, 2015 at 10:00 AM at St. John Vianney Catholic Church in Lithia Springs. Interment will follow at Meadowbrook Memory Gardens in Villa Rica. Messages of condolence to the family may be sent at www.jones-wynn.com. Jones-Wynn Funeral Home & Crematory of Douglasville is in charge of arrangements. 770-942-2311

Honor the life of Marianne Pierre

Please share a condolence, photo or memory of Marianne. We welcome all condolences that are positive and uplifting that will help family and friends heal.