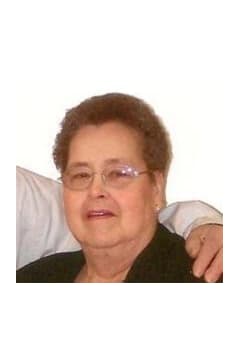 Mrs. Margaret Ann Wofford Cantrell, age 77, of Douglasville, formerly of Cobb County, Georgia, passed away Wednesday, April 4, 2012 at her residence. She was born May 7, 1934 in Canton, Georgia the daughter of the late Mr. Willie Wofford and the late Mrs. Ruby Wallace Wofford. She raised her family then worked at Arrow Shirt Company as a dispatcher where she retired. She was a member of Chapel Hill Road Baptist Church in Douglasville. In addition to her parents, she was preceded in death by her son, Gary Cantrell; brothers, Randall Wofford and Ray Wofford and sisters, Betty Earwood and Rachael Cantrell. She is survived by her husband, Ralph M. Cantrell of Douglasville; son and daughter-in-law, William and Leisa Cantrell of Douglasville; three grandchildren, Christopher Cantrell, Jamie Cantrell, and Chase Cantrell; several nieces and nephews also survive. The family will receive friends at Jones-Wynn Funeral Home, Douglas Chapel, Thursday, April 5, 2012 from 4:30 PM until 8:30 PM. Funeral Services will be conducted Friday, April 6, 2012 at 2:00 PM from the Chapel of Jones-Wynn Funeral Home with Rev. Randy Shirley officiating. Interment will follow at Mozley Memorial Gardens in Lithia Springs. Messages of condolence may be sent to the family from www.jones-wynn.com. Jones-Wynn Funeral Home, Inc., Cremation Service and Memorial Gardens of Douglasville in charge of arrangements. 770-942-2311

Honor the life of Margaret Cantrell

Please share a condolence, photo or memory of Margaret. We welcome all condolences that are positive and uplifting that will help family and friends heal.