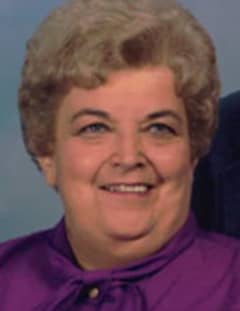 Mrs. Madeline Bragg Ray, 88, of Douglasville, Georgia passed away Wednesday, January 6, 2016. She was born March 2, 1927 in Villa Rica, Georgia, the daughter of the late Mr. James Riley Bragg and the late Mrs. Clara Faye Nix Bragg. She was devoted to family and was a homemaker. She was a longtime member of Beulah Baptist Church. She served on various church committees and as a Sunday School Teacher. In addition to her parents, she was preceded in death by her sister, Sarah Wright; and brothers, Jerry Bragg and James Bragg. She is survived by her husband of over 70 years, Clovis Eugene Ray of Douglasville; daughter and son-in-law, Gloria Jean and Jerry Braswell of Douglasville; four sisters and brothers-in-law, Annette and Norman Payne of Douglasville, Shirley and Bob Lowery of Duluth, Martha Montgomery of Villa Rica, and Louise Copeland of Jasper; two brothers and a sister-in-law, Frank and Joanne Bragg of Cherokee, NC and Charles Bragg of Florida; three grandchildren, Renee and Dale Choate of Ogden, Iowa, Rhonda and Mark Stewart of Murfreesboro, TN, and Emily and Jim Trotter of Columbus, GA; nine great-grandchildren; several nieces, and nephews also survive. The family will receive friends at Jones-Wynn Funeral Home in Douglasville, Friday, January 8, 2016 from 3:00 PM until 8:00 PM. Funeral Services will be conducted Saturday, January 9, 2016 at 1:00 PM at the Chapel of Jones-Wynn Funeral Home in Douglasville with Pastor Terry Marbut officiating. Interment will follow at Sunrise Memorial Gardens. Messages of condolence to the family may be sent at www.jones-wynn.com. Jones-Wynn Funeral Home & Crematory of Douglasville is in charge of arrangements. 770-942-2311

Honor the life of Madeline Ray

Please share a condolence, photo or memory of Madeline. We welcome all condolences that are positive and uplifting that will help family and friends heal.