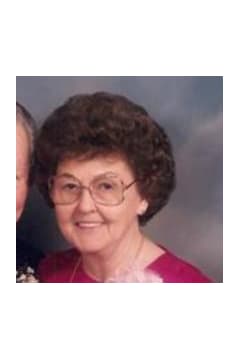 Mrs. Lorene M. Meadows, age 87, of Douglasville, Georgia passed away Tuesday, June 26, 2012. She was born December 11, 1924 in Douglasville, Georgia, the daughter of the late Paul and Ozella McTyre. She was a retired secretary having worked for Young Refinery in Douglasville for over thirty years. She was a member of Beulah Baptist Church in Douglasville and Women in Construction. She was an avid camper, gardener and homemaker. In addition to her parents, she was preceded in death by her husband, James M. Meadows; sisters, Lucille Gable and Myrte Echols. She is survived by her daughters and son-in-law, Gail and Ed McKay of Douglasville and Gloria Willcox of Houston, TX; three grandchildren, Amy McKay of Douglasville, Ashley and Keith Johnston of Dallas, GA, and Danielle Willcox of Concord, TX; three great-grandchildren, Alexis McKay, Emily Johnston, and Nick Johnston; several nieces and nephews also survive. The family will receive friends at Jones-Wynn Funeral Home, Douglas Chapel, Thursday, June 28, 2012 from 5:00 P.M. until 7:00 P.M. Graveside Services will be conducted Friday June 29,2012 at 10:00 A.M. at Beulah Cemetery in Douglasville with Dr. Danny Watters officiating. Interment will follow at Beulah Cemetery. In lieu of flowers contributions in memory of Mrs. Lorene M. Meadows may be made to the American Cancer Society, PO Box 22718 Oklahoma City, Oklahoma, 73123-1718, Alzheimer’s Foundation of America, 322 Eighth Ave., 7th fl., New York, NY 10001, or the Bulding Fund at Beulah Baptist Church, 4031 Bankhead Highway, Douglasville, GA 30134. Messages of condolence may be sent to the family at www.jones-wynn.com. Jones-Wynn Funeral Home, Inc., Cremation Service and Memorial Gardens of Douglasville in charge of arrangements. 770-942-2311

Honor the life of Lorene Meadows

Please share a condolence, photo or memory of Lorene. We welcome all condolences that are positive and uplifting that will help family and friends heal.