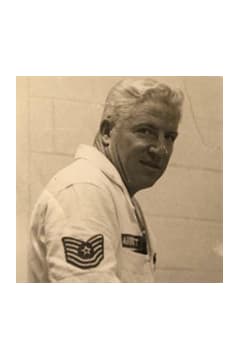 Mr. Jordan Andrew âJerryâ Abbott, 87, of Douglasville, Georgia passed away Saturday, August 18, 2018. He was born November 3, 1930 in Alamo, Georgia the son of the late Mr. Andrew Jordan Abbott and the late Mrs. Sallie Mae Fowler Abbott. He honorable served in the military, first in the U.S. Marine Corp for three years and he then went on to retire from the United States Air Force. He served his country for over 21 years. After his military service, he retired as a truck driver having worked at Winn-Dixie and at Pat Salmon & Son. He was of the Baptist Faith. In addition to his parents, he was preceded in death by a son-in-law, Raymond Morrical; brothers, William E. Abbott and Bob Abbott; and sister, Gertrude Oliver. He is survived by his wife of 63 years, Lynda Lynette Clark Abbott of Douglasville; six children and their spouses, Gregory Allen and Cindy Lee Abbott of Kennesaw, Tammy Marie Morrical of Dallas, Scottie Jordan and Deborah Abbott of Douglasville, Cynthia and Darryl Butler of Smyrna, Tanya and Anthony Sherman of Douglasville, Catherine Abbott of Douglasville; sister, Jewelene Abbott of Dublin; numerous grandchildren, great-grandchildren, nieces and nephews. The family will receive friends at Jones-Wynn Funeral Home in Douglasville, Wednesday, August 22, 2018 from 11:00 AM until 1:00 PM. Graveside Services will be conducted Thursday, August 23, 2018 at 12:30 PM at Georgia National Cemetery in Canton. Messages of condolence to the family may be sent at www.jones-wynn.com. Jones-Wynn Funeral Home & Crematory of Douglasville is in charge of arrangements. 770-942-2311

Honor the life of Jordon Abbott

Please share a condolence, photo or memory of Jordon. We welcome all condolences that are positive and uplifting that will help family and friends heal.