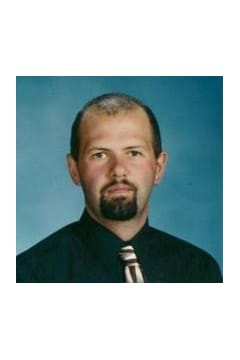 Jeffrey Michael Henderson, age 32, of Villa Rica passed away Monday, October 3, 2011. He was born September 5, 1979 in Mariemont, OH the son of Mr. Roger Michael Henderson and Linda Lee Williams Henderson. He was a graduate of Williamsburg High School in Williamsburg, OH. He received his Associates degree from the University of Cincinnati, Bachelors from Northern Kentucky University and finished with his Masters and Specialist in Administration and Education at the University of West Georgia. Mr. Henderson had been employed with the Douglas County Board of Education since 2002 at Chapel Hill High School and was currently the Assistant Principal at Lithia Springs High School. He is survived by his wife, Amber Lynn Cenci Henderson of Villa Rica; daughter, Ashley Michelle Henderson of Villa Rica; father and mother, Roger Michael and Linda Lee Henderson of Williamsburg, OH; maternal grandmother, Margaret Williams of Williamsburg, OH; brother-in-law and sister-in law, Nicholas and Amy Cenci of Amelia, OH. Aunts, uncles, niece and nephew also survive as well as many, many friends and extended family members. Celebration of Life Service will be conducted Saturday, October 8, 2011 at 11:00 AM from the chapel of Jones-Wynn Funeral Home in Villa Rica, with Monte Beaver, Sean Kelly and others offering eulogies. Interment will follow at Meadowbrook Memory Gardens in Villa Rica. The family will receive friends at Jones-Wynn Funeral Home in Villa Rica Friday, October 7, 2011 from 4:00 PM until 8:00 PM. In lieu of flowers the family has asked that contributions be made to the Ashley Michelle Henderson College Fund, C/O Members First Credit Union, 7421 Douglas Boulevard, Suite D, Douglasville, Georgia 30135. Messages of condolence may be sent to the family at www.jones-wynn.com. Jones-Wynn Funeral Home, Inc., Cremation Services and Memorial Gardens in Villa Rica in charge of arrangements. 770-459-3694

Honor the life of Jeffrey Henderson

Please share a condolence, photo or memory of Jeffrey. We welcome all condolences that are positive and uplifting that will help family and friends heal.