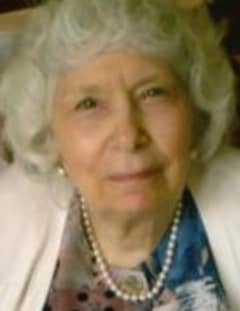 Mrs. Janie Huey Hudgins, age 85, of 132 Autumn Run Place, Villa Rica, Georgia, went to be with the Lord on Tuesday, October 23, 2012. She was born October 28, 1926, in Decatur, Georgia, the daughter of the late Mr. Harold Leslie Huey and the late Mrs. Lou Ella Huey. She was a homemaker, who loved gardening. She loved the Lord and attended Midway Church until her health declined.In addition to her parents, she was preceded in death by her former husband, Gilbert Hudgins and brothers, Harold and John Huey.She is survived by her daughter and son-in-law, Virginia âGinnyâ and Roger Barney of Villa Rica; son and daughter-in-law, Dr. Derrell and Madeline Hudgins of Fayetteville; four sisters, Elsie Biffle of Senoia, Juanita McKinley of Tucker, Cora Bond of Cartersville and Ellen Shumate of Snellville, as well as six grandchildren and fifteen great-grandchildren.The family will receive friends at Jones-Wynn Funeral Home in Villa Rica Thursday, October 25, 2012 from 6:00 PM until 8:00 PM. Funeral Services will be conducted Friday, October 26, 2012 at 2:00 PM from the chapel of Jones-Wynn Funeral Home in Villa Rica with Dr. Derrell Hudgins officiating. Interment will follow in West Georgia Memorial Park. Messages of condolence may be sent to the family at www.jones-wynn.com. Jones-Wynn Funeral Home, Inc., Cremation Services and Memorial Gardens of Villa Rica in charge of arrangements. 770-459-3694

Honor the life of Janie Hudgins

Please share a condolence, photo or memory of Janie. We welcome all condolences that are positive and uplifting that will help family and friends heal.