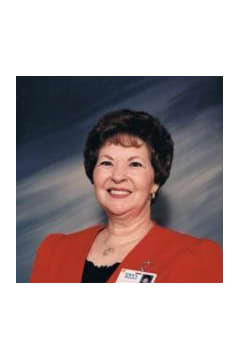 Mrs. Janice Maxine Lambert Matthews, age 75, of Villa Rica, Georgia passed away Monday, April 02, 2012 at her residence. She was born October 4, 1936, the daughter of the late Mr. Lewin L. Lambert and the late Mrs. Lovella Entrekin Lambert. She worked for Tanner Health System for 45 years, where she managed the Business Office for many years. In addition to her parents, she was preceded in death by her loving husband Ronald E. Matthews. She is survived by her son and daughter-in-law, Gary and Deborah Matthews of Villa Rica; three grandchildren, Jared Keith Matthews of Villa Rica, Jessica Nicole Matthews Franklin and her husband, Josh Franklin of Turnersville, and Lee Lyner of Carrollton; one great-granddaughter, Raelyn Amelia Franklin. The family will receive friends at Jones-Wynn Funeral Home of Villa Rica, Tuesday, April 3, 2012 from 5:00 PM until 8:00 PM. Funeral Service will be conducted Wednesday, April 4, 2012 at 2:00 PM from the chapel of Jones-Wynn Funeral Home in Villa Rica with Rev. Jeff Powell officiating. Interment will follow at Hillcrest Cemetery. Messages of condolence may be sent to the family from www.jones-wynn.com. Jones-Wynn Funeral Home, Inc., Cremation Services and Memorial Gardens of Villa Rica in charge of arrangements. 770-459-3694

Honor the life of Janice Matthews

Please share a condolence, photo or memory of Janice. We welcome all condolences that are positive and uplifting that will help family and friends heal.